When I unpacked my Motorola Xoom on Thursday one of the first things I saw was a pamphlet about upgrading the Xoom to 4G LTE. Despite being 4G LTE capable, the Motorola Xoom ships with a 3G module and needs to be sent to Verizon in order to get a free upgrade to the speedier wireless technology.

Not having 4G isn’t a deal breaker for me since I was primarily interested in experiencing Honeycomb first hand when I bought the Xoom lat week. Of course I would prefer LTE speeds over 3G since the faster wireless technology costs the same as a 3G subscription. 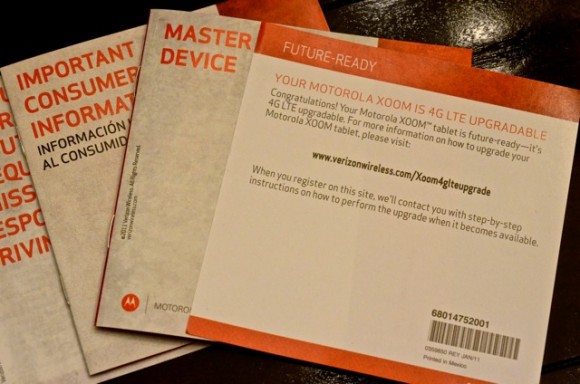 I thought I’d have to wait a little while for the upgrade since the flyer in the box said the upgrade would be available soon. I headed over to the  Motorola Xoom 4G LTE upgrade page and dug into the details. Of course I signed up for a notification. 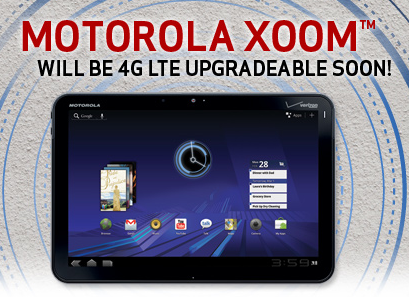 I received an email confirmation from Verizon that featured a graphic that screams that the 4G LTE upgrade would be available ‘soon.’ After spending so many years buying, using and writing about technology, I’ve learned to become wary of certain words used by those selling gadgets or appeasing customers. The word ‘soon’ is right up there at the top of the list with other favorites.

Ever hear something like this and get all excited? “The fastest gadget ever will be released soon. It will have up to 12 hours of battery life and cost less than $1,000.”

When I hear something like that at a tradeshow I now here something like: “The slightly faster gadget will be released, but we have no clue when. It will have far less than 12 hours of battery life and cost $999.99.”

I remember the Motorola reps at CES 2011 mentioning that an upgrade would be required to hop on the LTE network, but I didn’t remember any dates being thrown around. In hopes to figure out what Verizon’s definition of ‘soon’ is, I turned to Google and found some details over at Dorid Life. The site published a Talking Points memo for Verizon employees that bullet points the upgrade process. Right up top it states that the upgrade will be available approximately 90 days after launch. Tack on another six days for the round trip of the device and the earliest my Xoom will be upgraded will be early June. If that’s Verizon’s definition of ‘soon,’ I’d hate to see their definition of ‘later.’

Why can’t Verizon and Motorola just come out and tell consumers that it’ll be about 90 days until they can get 4G? When I bought my Xoom I was told it would be a few weeks. Verizon clearly has the info at hand and I don’t think three months is quite the definition of ‘soon.’

‘Up to’ Six Business Days to Upgrade Xoom to 4G LTE

So what happens about three months when the Xoom is finally ready for 4G?

According to Verizon, you have to prep the device by backing up your data. If you’re not the sort of user that trusts your personal data in the hands of strangers you can encrypt your data and reset the Xoom before sending it in. I certainly don’t trust my email accounts to strangers, so I’ll be going with the more complex option.

Verizon states that you’ll have to give up your Xoom for approximately six days while the upgrade is performed and the device makes it back forth via FedEx.  Six days a long time to go without a personal device that you’ve become accustomed to using on a daily basis.

Is the Xoom a good device? Definitely. But there are a lot of inconveniences and hassles for early adopters. I hope the upgrade to 4G will be worth the wait.

You can read the first part of our Xoom review here , the second part here and the third part of the review here.