The Motorola Xoom‘s long awaited upgrade to 4G LTE is close. We know that for sure. Exciting times to be sure for those of you that have held onto your Honeycomb tablet since it was released in February. However, up until today, we hadn’t really had a clear glimpse of 4G LTE’s capabilities on the Xoom. We had heard it was working great but hearing about it and actually seeing it are two different beasts.

Today, we have a fantastic screenshot from a Xoom user who apparently is apparently using an upgraded Xoom as part of a private trial.

This screenshot shows off the blistering speeds of Verizon’s 4G LTE network on the Xoom. Notice the 4G icon on the screen and then take a look at the type of speeds this guy or gal is getting with his or her tablet. 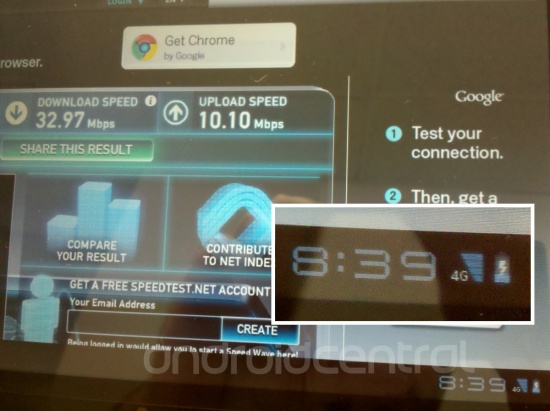 We see 33mpbs download and 10mpbs upload. That is phenomenal and definitely should have all of you Xoom owners out there exciting for what September is going to bring. Of course, you’ll have to send your tablet in for the upgrade but that’s just a small price to pay for getting the boost up to these kinds of data speeds.