Since the press release went out, Twitter has been lit up with negative tweets about the Motorola Droid Pro. Many calling it ugly or hideous. Beauty is in the eyes of the beholder because I think it looks pretty nice myself. I wouldn’t use it since I don’t do front facing keyboards, but I can see it being really popular with the heavy business smart phone users. That is exactly who Verizon and Motorola are targeting with the Droid Pro.In fact, here is the title of the press release…

DROID Does Business: DROID Pro by Motorola Designed for Work and Play on the Nations’s Largest and Most Reliable 3G Network 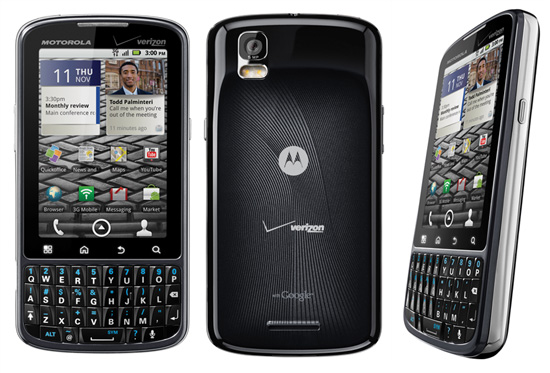 The Droid Pro has a 1GHZ processor, 3.1-inch display, 5 megapixel camera with a dual LED flash, a total of 4GB of memory, and front facing, full qwerty keyboard. Pretty impressive device! For all of you that are worried about which version of Android is on board, it’s 2.2. The Droid Pro comes packed with business features too:

The Droid Pro will be available in the coming weeks and the price will be announced closer to launch.

Android Community was there for the press conference and captured the announcement and shows a little hands on time in this video:

What do you think? Ugly or not?