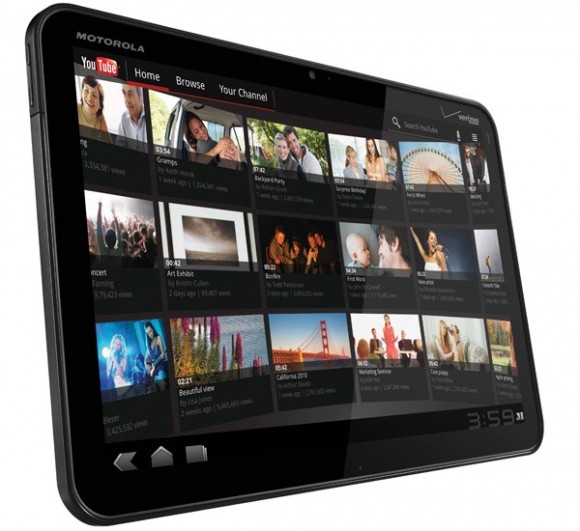 Well, it’s official. Motorola will be rolling out its Honeycomb Tablet, already known as the Xoom, sometime in Q1 of 2011. What wasn’t known that the initial roll out on Verizon will be 3G with an update available in Q2 to soak in all that 4G goodness yet to come.

The Xoom will feature a 1GHz dual-core Tegra 2 as the engine to display all that Honeycomb Tablet goodness on the 10.1 inch screen at a 1280 x 800 resolution. Yep there’s a 5 megapixel camera. You can record video at 720p video and play it back at 1080p and according to the PR do so for up to 10 hours before your battery runs out. Onboard storage is listed as  32GB.

Motorola XOOM redefines the tablet device category by providing more ways to have fun, connect with friends and stay productive on the go. It allows consumers to experience HD content right on the device, supports 1080p HD video and HDMI output to display content on larger HD screens, and plays video and other rich web content seamlessly with Adobe® Flash® Player. Motorola XOOM features a front-facing 2-megapixel camera for video chats over Wi-Fi or 3G/4G LTE, as well as a rear-facing 5-megapixel camera that captures video in 720p HD. It delivers console-like gaming performance on its 1280×800 display, and features a built-in gyroscope, barometer, e-compass, accelerometer and adaptive lighting for new types of applications. It also features Google Maps 5.0 with 3D interaction and delivers access to over 3 million Google eBooks and thousands of apps from Android Market™.

For working on the go, Motorola XOOM provides constant connectivity − including connecting to Gmail or Exchange email; opening and editing documents, spreadsheets and presentations; and viewing calendars and sending out appointments or meeting notices – with mobile broadband speeds. Its mobile hotspot capability provides an online connection for up to five other Wi-Fi-enabled devices.

“Motorola XOOM is a powerful addition to Verizon’s product lineup and builds on our combined leadership with Motorola to deliver innovative mobile devices and service on the Android platform,” said Marni Walden, vice president and chief marketing officer for Verizon Wireless. “Motorola XOOM gives consumers complete access and control of their favorite personal content and work files whether through our nationwide 3G network, or through our lightning-fast 4G LTE network as it rolls out around the country.”

“Light, powerful and fundamentally different than anything else on the market, Motorola XOOM leverages the very best technology available today to redefine what a tablet experience can be,” said Bill Ogle, chief marketing officer of Motorola Mobility. “The first device to feature software designed specifically for tablets, Motorola XOOM goes everywhere you do and delivers everything you need.”