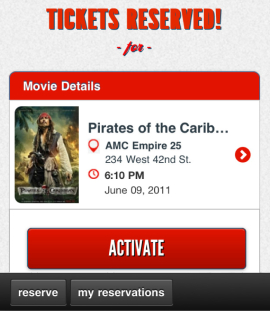 MoviePass is a new movie-going and movie watching service that takes your movie experience to the cinematic big screen. Like Netflix’s subscription service for entertainment, MoviePass, now in beta, will allow users to pay a $50 per month fee to watch as many movies as they want each month in select theaters. Currently, the service is limited to select theaters in the San Francisco Bay Area in California, but the service is looking to expand to more locations and more geographic areas.

Covering 43 percent of movie theaters in the Bay Area, the company will roll out into additional markets this summer and fall.

The way the service works, according to CNET which had some hands-on time with the service, is that you’d use your smartphone to reserve your seats at your desired theater using an HTML 5 app. When you arrive at the theater, you’ll flash them your phone, just like if you’re paying with a credit card, and the theater would print your ticket stubs.

The beta goes into effect this Wednesday, June 29th, and is yet another example tying the Internet and smartphones with the physical world, just like what NFC payments is hoping to do. The best part is that unlike Netflix, you don’t have to check to see if your phone will be compatible, but you do need to live in a geographic area where MoviePass will service.

While the prospect of unlimited movie watching in a theater every month is enticing, I think additional pricing levels may need to be worked out for the service to catch up, especially for around $10 a month, you can get a DVD shipped at a time for unlimited rentals to you every month via Netflix, plus unlimited video streaming.

For now, the following Bay Area theaters are accessible with the service: