According to The Verge, Mozilla’s Junior web browser is relatively simple compared to Safari and every other browser in the App Store. Unlike most other browsers, Junior doesn’t support tabs. Instead the browser presents users with a full screen website with two buttons on the left and right of the screen.

Those two buttons are the self-explanatory back button and a plus button. The plus button brings users to a new screen where they can see their recently visited tabs and a selection of their favorites/bookmarks. The bottom of that screen also includes an omnibar for search and URLs. It’s a simple layout that looks like it works well on the tablet. 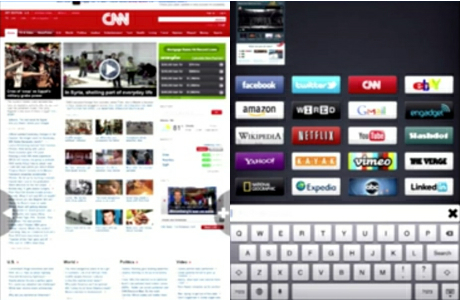 Users will also have access to other basic functions like forward, refresh, and print by pulling the two buttons to the center of the screen. The team doesn’t know exactly which functions will make it into the final version of the browser, though we assume forward and refresh are basic functions the team wouldn’t leave out.

Like every other web browser on the iPad (including the rumored Chrome for iOS), Junior will use the Safari WebKit rendering engine instead of Firefox’s Gecko engine. To most users that won’t mean much, it just means web pages will work just as well in Junior as they do in Safari. Also like other browsers, users can’t set Junior as the default web browser for the iPad. Links from other apps will still open in Safari, even if users prefer Junior.

The Mozilla team is still hard at work on Junior, so don’t expect it any time soon. We don’t know when the browser will hit the App Store, we just know it will sometime.