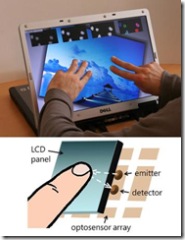 Ok – this has to be one of the coolest things I’ve seen in a while, and it gives me hope that Microsoft gets the usage scenario potential for multi-touch on a mobile devices like tablet pcs and ultra-mobile pcs. This multi-touch implementation, called ThinSight, can see other devices and respond to say, infrared, as well.

Here is the NewScientist.com interview with Microsoft Research in Cambridge, England. The video demo is below – a must see.

A computer screen that also acts as a two-handed touch interface and a crude infrared camera has been developed by researchers at Microsoft’s labs in the UK.

Users can operate the display with both hands, in a similar manner to the display in the film Minority Report. But this screen can also recognise particular hand gestures as well as objects placed within a centimetre of its surface.

“It can sense much more than fingers, and is essentially a low resolution scanner and camera,” says lead researcher Shahram Izadi. The screen can even communicate wirelessly with other devices nearby using the same infrared technology it uses to see.

The technology Ã¢â‚¬” dubbed ThinSight Ã¢â‚¬” was developed by adding an extra layer of electronics behind a normal laptop screen. This adds a couple of centimetres to the overall thickness, but completely transforms its abilities.