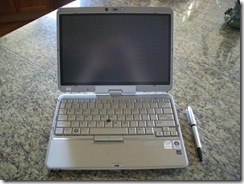 It appears that my lucky streak with computers has finally been broken. My last experience with having to send a system in for repair was in about 1996 when my IBM ThinkPad 701C had to go in for repairs on its famous butterfly keyboard. After a mere 12 years, I have to send in another system.

My HP Compaq 2710p is broken. However, it is one of those random problems that can strike anyone at about the 4-6 month stage of ownership and I don’t blame HP. The motherboard appears to have a problem, probably as a result of the natural burn in process, where the second memory slot causes random memory errors. I determined this after some testing using a handy BIOS utility that tests the memory outside of the OS. With 2 sticks in place, it errored almost immediately. With either stick in (but no second stick) each memory stick tested out just fine. That unfortunately points to a motherboard issue, probably with a loose connection on the secondary memory slot. :-(

I could see this coming. I’d been having unusual blue screens, all of which were memory management errors, for several weeks, getting progressively worse over time. I finally gave in and ran the Vista memory diagnostic which indicated a problem with the memory. No surprise, but a depressing validation. Upon finding the BIOS memory checker, I ran that, which also failed, and started checking the sticks individually. It was around this time that Vista started acting REALLY weird and bluescreening very often, like about once an hour or so. Finally, it just crashed. No reboot. When I did the repair option, it couldn’t repair. I tried repairing from a Vista disk. No go. Uh oh. Just like most people, I don’t back up that often (bad idea) and there was some vital stuff on there, like my term paper due in 2 days.

So I got out my bootable Knoppix Linux DVD. It wouldn’t boot. I tried 5 different Linux distros and none would boot, until I had the brilliant idea to remove the second stick of memory. Booted fine! Hurray! I copied off all of the important data, plus some unimportant data, and shut it down for the last time.

I delayed calling HP Support for a couple of weeks. I just couldn’t accept that I couldn’t fix this system. In the end, though, I gave in and called. A very nice man appropriately name Raj took my call. Although I was fully prepared to be treated like an idiot while the tech support person followed his script, such was not the case. I was treated respectfully and listened to (!!) while I outlined the problem. He walked me through a couple of things attempting to see if the problem was possibly a corrupt BIOS (admittedly a possibility) or a hardware failure. However, the BIOS suddenly developed a password when none had ever been set before and I was unable to continue debugging. At that point we both gave up and he wrapped up the call. Including waiting time, I was on the phone for about 45 minutes.

HP shipped me a box in which to send off my 2710p to a place in New Jersey. The box included everything I needed for shipping – packing material, the pre-paid return shipping label, even tape to close the box. So this afternoon I will drop it off and wait to see how long it takes before she comes home to me again.