My Custom Galaxy Nexus Setup [How To]

I have to admit right off the bat that I have steered clear of adding custom ROMs to my phones for most of my smartphone life. Back when I was a long time Microsoft MVP, the modding phones and Pocket PCs was kind of a grey area and it was just better for me to leave that world alone.

When I became an iPhone user for a year, I got into customizing the looks of my iPhone doing some heavy theme modding though. I wrote an article on Mobilitysite, which I republished on my personal blog last year about the subject. If you are inclined to know more about my views on the subject back then, feel free to read it. My views today are similar on some aspects, but clearly different on most of the issues. I flashed one Android device prior to this Galaxy Nexus just to test something on my Xperia X10. It was painless, but there are plenty of steps and you have to be careful not to miss a step. That said, I think it’s safe to say I am a NOOB when it comes to ROMs.

Well, I was able to fix all those with a new launcher. The thing is the ICS (Android 4.0) launcher is pretty good as it is. It would be horrible to go to another launcher that didn’t take advantage of what ICS brought to the table. I found a launcher that let me have my cake and eat it too! Nova Launcher Beta.

Take a look at the before and after shots of my home screen on the Galaxy Nexus and then I will tell you how I accomplished all of it. 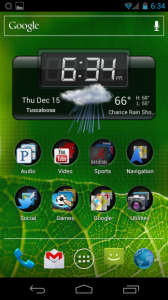 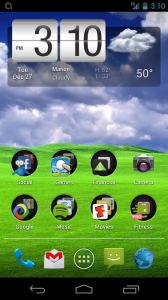 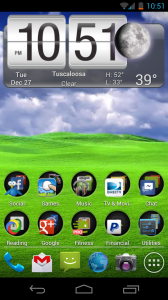 Here’s a video showing off my Galaxy Nexus setup:

Before reading any further, it should be known that installing custom ROMs will void your warranty if something happens and you can’t return it back to factory. There is a possibility to brick your device as well. In many cases, you will be able to fix any mistakes, but this is your warning. Myself and GottaBeMobile will not be responsible for any damages that might occur if you decide to proceed with any of this modding.

If you are completely new to installing ROMs, unlocking, and all the other jargon associated with modding and Android Device, there is a super informative guide over at XDA. I would recommend giving it a read before you get started if you are new like me!

So here’s what I have done to get to the point I am at with my Verizon Galaxy Nexus.

As I said above, proceed at your own risk. I will link some of the procedures as I am fairly new to this, I don’t feel qualified to tell you how myself. I will arm you with links and knowledge to accomplish the same.

Before installing any of the mods or roms, you have to root and unlock your Verizon Galaxy Nexus.

The procedure I used to walk me through this procedure was found in the Android Central forums. Josh also posted a guide on doing this a different way if it looks easier for you. After this is done, you are almost ready for action!

Next, you have to install ClockworkMod Recovery LTE.

This version is custom-built for the Verizon LTE Galaxy Nexus. Hit this link and follow these instructions to install ClockworkMod Recovery. Once you have this installed, you are ready for fun!

ClockworkMod Recovery is a tool that allows you to flash the phone with different ROMs from the phone without having to be connected to a PC. It allows you to install modifications, roms, and more from a zip file that you will add to your MicroSD card. In the case of the Galaxy Nexus, you virtual (internal) SD card. This tool also allows you to make complete image backups of your phone in case you run into troubles. You can easily back up and restore with this recovery tool.

Now that you are unlocked, rooted, and have ClockworkMod Recovery in place, you are ready to get to the fun stuff.

I chose to go with the Android Revolution HD ROM. This ROM is based on the stock ICS 4.02 ROM. I chose this ROM because the developer of this ROM is reputable and has produced quality ROMs for numerous devices already. I have full faith that they will continue development of this ROM long enough for me to move on to another phone. There are plans for themes and add on mods are already popping up that are compatible with this ROM. This ROM doesn’t change the looks of Android 4 at all.  I have been on this ROM for a full day now and haven’t run into any issues.

The installation is quite easy. Just follow the instructions in this thread and you are golden. Make sure to do a Nandroid backup before you proceed just in case.

Get Rid of the Google Search Bar

The mod that I installed to get rid of the Google Search bar is from the work of XDA member djmcnz, but this isn’t the launcher that I ended up using. (Link) Make sure to choose the right download if you choose to go this route. This launcher is based on the stock ICS launcher but changes the grid and removes the persistent Google Seach bar.

Instead of the launcher I linked above, I chose to go with Nova Launcher. Nova Launcher is a launcher replacement based on the stock ICS Launcher. You can still use folders and if installed as a system app, the app tray will still include widgets. Nova also returns old school Android methods of adding widgets. In previous versions of Android, you could tap and hold the screen to add widgets and change wallpapers. With stock ICS, you can only add wallpapers and you have to pop into the app tray to work with widgets. Nova Launcher offers several great additions to an already awesome phone. Check out the video embedded in this post for a decent walkthrough of what you can do with Nova Launcher.

To install Nova Launcher, head over to this thread and follow the instructions. Basically, you throw the ZIP file onto the virtual SD card, get into ClockworkMod Recovery mode and install from SD.

That’s all I have done so far aside from setting up the Galaxy Nexus icons/folders the way I want and adding some widgets. The widgets I use for the clock with weather and the toggle widget is HD Widgets, which is on sale for $0.99 in the Android Market right now.

I will share more that I do with this unlocked/rooted Verizon Galaxy Nexus as I play some more.

Let me repeat, there are potential warranty issues involved when you start modifying your device. Please use caution and read, read, read. We won’t be held liable for any damages cause should anything go wrong. This post is designed to share with those interested how I achieved the setup I am using on my Galaxy Nexus.