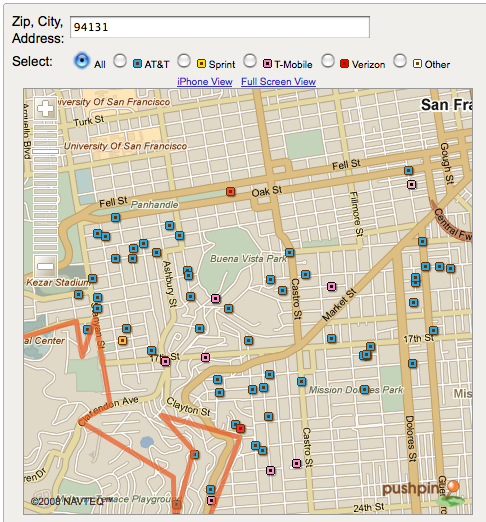 It’s no secret that AT&T’s 3G service has been a disappointment for many iPhone 3G users. During conferences like CES, SXSW and WWDC, the crowds of iPhone users have overwhelmed the network. While it’s certainly inconvenient to not be able make calls or fetch emails while at a conference, I’m more disappointed in the lack of decent reception that’s become a daily issue for me. I live in the middle of San Francisco, a city that has an incredibly high concentration of iPhones and several people I’ve talked to are passing on the iPhone 3Gs because they don’t want to invest more money and not have the guarantee of being able to make or receive a call.

There’s not a day that goes by where I have a dropped call or someone complaining about poor call quality. I was on a call with a local PR company and when the lady on the other line couldn’t make out my words, she immediately asked if I was an AT&T subscriber. I often get voicemails after my iPhone fails to ring.

I checked out Deadcellzone.com and as you can see in this picture, I’m not the only one complaining about AT&T’s network quality in the neighborhood. This site lets mobile phone users map areas with poor phone reeption.   Comments like “little or no service” are peppered all over the map of San Francisco. How does your neighborhood look? Is it a dead zone, or are you happy with your wireless carrier?

In our home, AT&T’s service is wildly inconsistent. Once in a while I get a decent 3G signal, othertimes we’re completely blacked out. If I stand on my deck I can generally get a clear EDGE signal, but even that’s dicey at times. Sometimes the network favors one iPhone over the other. The other night my iPhone had clear reception, but my wife couldn’t dial out. I tried calling her iPhone from mine. Hers didn’t ring, but I could hear her voicemail message clearly.

I really enjoy using my iPhone 3G and want to buy the iPhone 3Gs, but I hate paying so much for a phone that doesn’t let me reach out and touch someone…