My Dinner With Origami

I had the good fortune last night to have dinner with a couple of members of the Mobile and Tailored PC team, Lora Heiny, (also known as the First Lady of the First Family of Tablet PCs, and Ken Vassallo, the Lead Product Specialist, both of whom just happened to be in the Washington DC area on Microsoft business. It was about a 65 mile hike, but since I haven’t had the opportunity as a Tablet PC MVP to attend many of the events when face time with Microsoft folk is available, I was more than willing to take the drive. And it was great talking Tablet’s and UMPC/Origami with Lora and Ken. 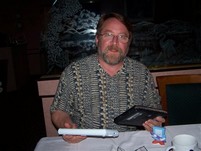 Not only did we chat about our favorite devices but I got to put my hands on both a Samsung Q1 and a TabletKiosk eo for the first time, after reading and blogging about these UMPC/Origami units from a distance. I have to say, in a side-by-side quick dinner table comparison of the two units, the Q1 wins in my opinion. It just feels more solid and more mature as a unit, compared to the eo. Again, in a a very quick opportunity to look at each unit, I experienced some digitizer issues when using the stylus on each unit, though I imagine with practice that could be 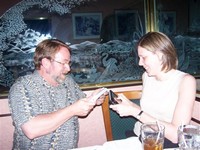 overcome. Intriguingly the Samsung also felt smaller and more compact than I imagined in my mind, while the eo felt about like I expected both units to feel in terms of size and weight. The Samsung, even though it feels more solid actually felt noticeably lighter in my hands.

Again, I didn’t spend tons of time with either Origami, preferring instead to not be rude and enjoy the good company of my dinner companions and some good discussion about Tablet PCs, Origamis, Microsoft’s weird naming nuances, (more on that in another post.) I will say the brief time I spent hands on confirmed my thoughts about the Origami concept and how it could fit into my workflow. Now if only that price point can come down a bit.