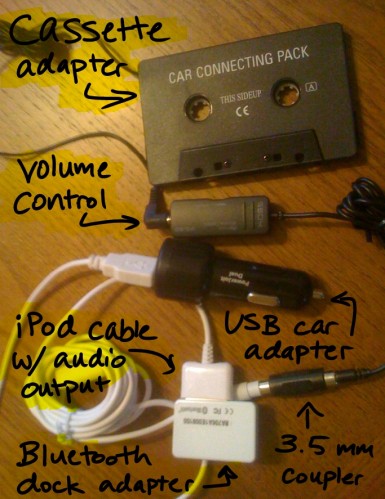 One thing I love is listening to my music from my iPhone in the car. One thing my wife doesn’t love is wires strewn about connecting my iPhone to the car. Thus, I’ve been tinkering with solutions that satisfy both requirements, and I think I’ve finally hit it.

To go wireless, there are two options: FM transmitter or Bluetooth adapter. Tried the FM route a couple of times. Too many stations around here. No open channels. Too much static. Had to go with Bluetooth.

Unfortunately, an adapter built for my car deck is expensive and requires getting in behind the deck. My wife gets a little particular when it comes to opening things up and tinkering with their innards, so I had to come up with an external approach.

One option is a Bluetooth cassette adapter, but that runs on batteries and requires recharging. No good. Bluetooth adapters that run on AC come with power bricks. No good either. So I decided to address both issues by piecing together a USB solution.

The crucial component to this set up is a Bluetooth module that can run on USB. I settled on ANYCOM 82599VRP FIPO. It’s intended for devices designed for the iPod dock connector, but as I figured, it works on a dock connector cable too. Found it on eBay for just under $40. Testing it around my office, I find that it actually gets the 10m range that Bluetooth is advertised to get. The other components came together from there. 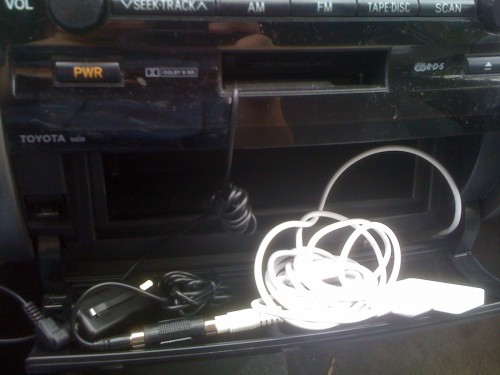 Connecting the FIPO to power and audio is a generic iPod dock cable with a 3.5mm output. Its USB cable plugs into a Griffin PowerJolt Dual car adapter. I went with the “dual” in case we need to plug something else in (and our car has a second port too). The audio cable outputs to a standard cassette adapter connected with a female-to-female coupler. System looked pretty good, but there was one problem: too much volume.

The FIPO outputs volume at maximum. That’s fine for standard line-in devices, but for a cassette adapter, it’s too much. Audio was garbled with noise. To compensate, I added in a volume control component from Koss. Works like a charm.

The bulk of the kit fits in a compartment under the audio deck with a flip-down door. The cassette cord runs about half an inch from the player to the top of the door, while the USB cable runs from under the door to the car’s power port. Not completely concealed, but there are no cables running outward and nothing to plug in. The FIPO connects to my iPhone in about three seconds, less time than it takes me to put my seat belt on and pull out my iPhone to press play.

Audio quality is just shy of matching a direct plug into the cassette adapter. Bit noisy at high volumes, but fine for my usual listening, and vastly superior to an FM transmitter.

In retrospect, I admit the price of the components added up, though still short of the price of an in-deck adapter. However, I like that I can easily remove the system and plug it into a new car if needed. I can also add and remove modules to change its capabilities, as I did with the volume control. Perhaps I could add a splitter and retractable cable for backup input. Or maybe a better Bluetooth module will come along which I can swap in. Probably won’t, but I have the option and that’s why the modular approach works for me.