Retina, Retina, Retina. It seems like that’s still the one of the big topics about Apple’s new iPad. I’m already on record about how I feel about the Retina display. But my eye doctor, well, I’m not sure he’ll go on the record publicly but he sure did with me.

Yesterday I had an appointment to recheck my new prescription and new eye glasses because things just don’t feel right. I have progressive lenses (and have for awhile) and it always takes several days to adjust to new glasses once they arrive. But after giving them a week or so things just weren’t right. 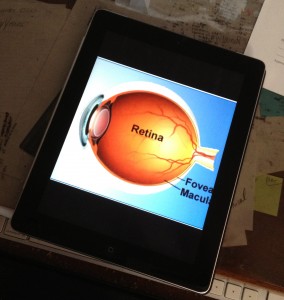 In explaining to the doctor what I was seeing, I used the new iPad as one of the examples. I explained how I used it, how I held it, and what I was seeing. Bottom line things were a bit blurry since the new glasses, which should have cleared things up a bit. Then the conversation turned to the Retina display. After taking a look at the new iPad he was concerned, saying that he didn’t think he’d ever be able to tune certain prescriptions so that his patients would be able to see it as clearly as it is intended. He predicted that some patients would come back time and again to get things just right.

I’m wondering if others who have complicated prescriptions will be having similar experiences.