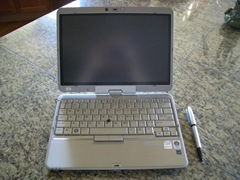 Okay, a great big update on the whole saga so far. Note that I do NOT have my HP Compaq 2710p back from the repair facility yet.

1/25: Called HP. Very nice person, very helpful. Sent me a box for shipping the system to HP for repair.

2/1: Day 1: Shipped to HP in the provided box. I photocopied everything, that goodness.

2/22: Day 22: Claimed that I had been sent status emails on 2/19 and 2/21. I never received the emails. Offered to send me another email. Um, why, if the first two were never received, would anyone think that sending another is going to help? I suggest we verify my email address. It was wrong – same misspelling of my last name that was corrected on 2/8. Said the unit status was “being evaluated”.

3/3: Day 32: Day Status was “new system board needed” waiting on parts. Notice that it has taken more than 30 days for them to determine the problem, let alone fix it.  ETA 3-5 business days.

3/10: Day 39: New system board was installed on 3/8. Should ship within 2 days. Provided another, different, email address for status.

3/11: Day 40: If this were the Bible, at least the torment would be over. Alas, no. Receive an email update. (Wow!) Email says that I need a new system board and that they’re waiting on parts. Um, okay, there’s a conflict…

3/13: Day 42: System on hold waiting for a part. When I mention the status update from 3/10, I got put on hold while the person investigated the issue. When he came back, I was told that they installed a new keyboard (?!), and that they have received the new LCD (?!) and it should be ready in a couple of days and ship next week.

HP has had my system for nearly as long as I did before I had to send it in for repair. Overall, I’m pretty nervous about what I’m going to be getting back. I have no idea why they would replace the keyboard or LCD – both were functioning fine when I sent it in. Why would they need replacing now?

I’ve been running this as rather an experiment. Since I didn’t desperately need my system right now, I wanted to see exactly how long it would take for an average repair. This was a pretty simple problem, too. Given that I have a 3 year, business grade warranty on this system, I’m appalled at how long it has taken to have a simple repair done. I am equally, if not more, appalled at how badly HP has communicated the status updates on my system. That is not business grade service.

Check out the thread 2710p Repair Story in the Forums.