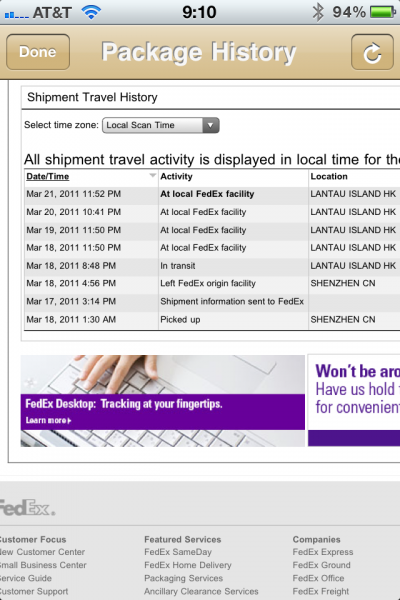 Apple and I have been playing all kind of cat and mouse games with shipping over the last week. Not only am I still waiting to see my iPad 2 make it somewhere close to the shores of the US, but I had to return my MacBook Pro 13, or rather swap it out for a new machine. (More on that later.)

I’m writing this not so much to complain but so that others who might be in a similar boat might get some information. From what I’m reading Apple sort of reneged on its Free, Fast Shipping for the iPad 2. According to various posts I’m seeing, Fedex is telling users that Apple chose International Economy Shipping for the iPad 2. That means as far as Fedex is concerned those shipments go on a space available basis. And given the tumult in that region caused by the Japanese earthquake and tsunami, quite a bit of traffic is getting rerouted through Lantau Island in Hong Kong.

Like I said, not much to complain about given the circumstances, beyond Apple not living up to its initial promise of Free, Fast Shipping. Again, that also depends on if the reports are true from Fedex, or that’s just a company line. We all know that game.

Regardless, my iPad 2 has been vacationing on Lantau Island, HK since last Thursday, which was the last day of the 3 to 5 days shipping I was given when I ordered. Ah, well.

As to the MacBook Pro 13. These laptops rock and roll when it comes to speed and performance, but I’m now about to send my second one back. After a couple of days I noticed a lag when it came to using the built in trackpad. I’d touch it but the cursor wouldn’t move for a second or two. That delay kept getting worse. I took it to the Genius Bar, they recommended reinstalling from scratch. I did. The problem seemed to go away. But a couple of days later it came back. So, I sent back the purchase and Apple shipped me a new one. Intriguingly that all took place after the iPad 2 order and the return and shipping of the new machine happened while the iPad 2 is taking its respite on Lantau Island.

And it looks like this MacBook Pro is going back as well. It didn’t take a couple of days for the same trackpad drag issue to manifest itself. It only took a couple of hours. I’m guessing there is a hardware software conflict somewhere, so I’m monitoring the issue as a slowly install my Apps on the machine after yet another wipe and clean install. This doesn’t seem to be a widespread issue, so I’m guessing it has something to do with some combination of Apps that I use. Regardless it is frustrating to me and to the Apple techs.

It will be interesting to see if this exchange happens before the iPad 2 actually leaves Lantau Island, HK.