Kids television shows often reflect back aspects of our culture in subversive or coded ways that may not be fully appreciated until or unless one is an adult. The cartoons of my childhood are notorious for this — Animaniacs, Freakazoid, The Real Ghostbusters, Mister T — and it’s not surprising that when people around my age start to create and write for cartoons this sensibility comes out.

Thus, I was only a little surprised when watching a recent episode of My Little Pony: Friendship is Magic to discover that it is an extended metaphor for the struggle between Apple and the company’s competitors in mobile technology.

Ever since the show’s debut it’s been clear that the people behind the scenes are geeky Gen Xers and enjoying the freedom to fill a show aimed at the kids of Gen Xers with our cultural references. I shouldn’t find It odd that some pro-Apple propaganda slipped in there as well, especially since the show is all digital animation, but the whole thing was so blatant.. and warmed my nerdy little heart.

My Little Pony revolves around 6 pony friends who all live in a small town called Ponyville. One of the main characters, Apple Jack, helps to run the family’s apple farm with brother Big Macintosh, sister Apple Bloom, and matriarch Granny Smith. In episode 15 it’s the beginning of apple cider season and AJ’s friend Rainbow Dash is determined to get to the cider line before dawn since in previous years other ponies ahead of her drank it all before she could have a drop. But lo, when she arrives there’s already a huge line of tents filled with ponies who camped out overnight in anticipation of the once-a-year cider.

The cider again runs out before Dash can get a cup. So she and the other cider-less ponies begin to complain that this happens every year and why can’t the Apple family make more cider faster? AJ says that their cider is made with care and love and can’t be rushed. 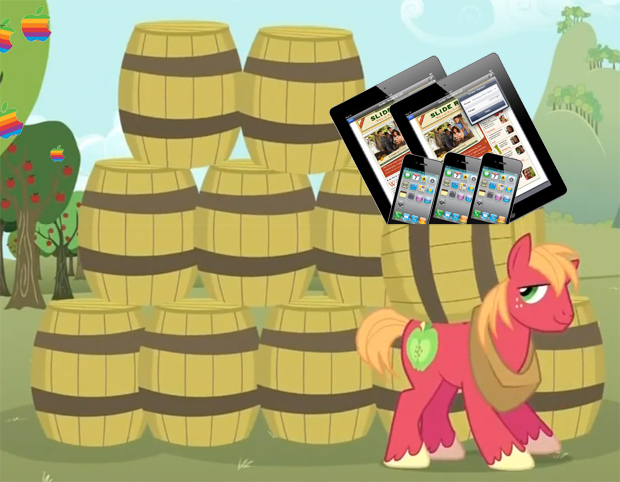 But then two unicorns named Flim and Flam roll into town with a giant machine that can make cider automatically and much faster than the Apple family. Even though Granny Smith admits that the cider is tasty, she still claims that nothing good can come from such careless mass manufacturing.

The whole thing comes down to a contest between Flim and Flam’s machine and the Apple family. Whoever can produce more (not better, but more) cider wins the exclusive rights to sell cider in Ponyville.

The machine is initially ahead until AJ’s five friends (including Rainbow Dash) begin to assist. In order to stay ahead, the brothers turn their machine up to 11, which causes it to start ripping trees out of the ground instead of just plucking apples. The machine is supposed to automatically reject bad apples, but they turn that off so cider production will go on unabated. Dash encourages AJ to do the same, but the Apple family won’t compromise the quality and integrity of their cider for anything.

In the end Flim and Flam win by making more barrels, but the people of Ponyville reject them because their cider is nasty and filled with twigs and rocks.

At the end of each episode of MLP a moral is given. This is children’s television after all. Usually it’s one of the ponies explaining the lesson they’ve learned that day. This episode breaks that mold.

“Dear Princess Celestia, I wanted to share my thoughts with you,” Apple Jack voiceovers. “I didn’t learn anything! Ha! I was right all along. If you take time to do things the right way, your work will speak for itself.”

I am left wondering if this episode is a metaphor for why Apple should continue their lawsuits against Samsung, or an explanation of why people will (and should) camp out and stand in long lines for the iPhone or iPad, or a condemnation of people who complained that the iPhone 4S was so late in coming last year. Perhaps it is all these things.

It’s also clearly a shake of the finger at manufacturers who pump out phone after phone in quick succession, don’t support said phones properly, and respond to issues with their phones by making a new version slightly better (which has its own problems). We’ve complained about this before.

All of these are excellent lessons, but I do worry that the show is sending kids the wrong message about camping out overnight in line. No one should be in a line for hours and hours just to get a new piece of tech. There are few things in the world worth hours of line standing. The iPhone is not one of those things.

Lest you doubt my interpretation of this episode, check out how The Hub is advertising My Little Pony. “There’s A Pony For That”? Come on.