The biggest deal about the new iPad is the awesome, outrageous, amazing, beautiful, mesmerizing, pick your adjective, Retina display. Reviewers are wearing out the Thesaurus trying to find a way to describe it. I have to admit, skeptical as I am, I was a bit disappointed in what I saw when I first looked at the new iPad’s display. Many are comparing the significant change to what they experienced when the first Retina display appeared on the iPhone. I’m doing the same. My response then was the same as it is now. Yep. It looks better. But  it isn’t earth shattering. I’ve seen some folks saying this innovation is more than just resolutionary and is truly revolutionary. Perhaps beauty is in the eye of the beholder. Or maybe it is just my retinas.

Don’t get me wrong. The increase in pixels is eye catching. But I’ve got to wonder if Apple is placing the new iPad alongside the iPad 2 in its stores. When I place the two devices side by side the increased resolution is noticeable but to no degree that makes me want to jump up and down and proclaim a revolution. I’m guessing a lot has to do with lighting and brightness settings. (Turn the brightness up full on the new iPad and you can make your retinas burn.) And that feeling of seeing icons floating on the screen that some describe depends largely on the wallpaper you’ve chosen for a background. The one I like to use doesn’t show any real distinction between the iPad 2 or the new iPad.

More troubling, I also noticed that the color temperature of the display on the new iPad is warmer or yellower. In fact when the two devices are placed side by side the display on the new iPad looks like it has a case of jaundice. I don’t notice this as much when I am only using the new iPad, but only when they are side by side. But I will say that some images that have a heavily saturated yellow or green in them make this apparent even in isolation. Side by side viewing text the “paper” appears distinctly yellowed.

I mentioned this to the GBM gang and some are seeing the same thing. Xavier pointed to a thread on Ars Technica where at least one fellow seems to have a more distinct case of it than I do. (Or at least his camera captures it better than mine does.) I don’t know if this is an early run manufacturing bug, (that happens you know) or just what we’re going to see with these new iPads, so I’ll be keeping a watch on this in the days ahead. Bottom line, it leaves my reaction to the new iPad a bit tinged.

The pictures in the gallery below were taken with an iPhone 4S and the new iPad is on the right, so you can judge for yourself. Both iPads had auto brightness turned on. 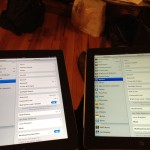 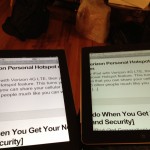 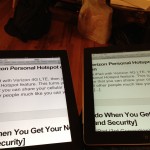 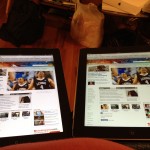 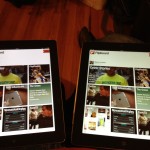 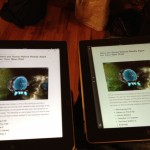