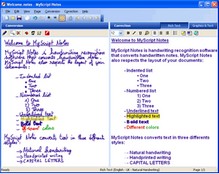 Vision Objects has released version 2.1 of MyScript Notes, handwriting recogition software for a variety of pen-based input systems. I’ve not seen or tried this out, so this looks like something we’ll have to give a look-see. Here’s the press release:

MyScript Notes reliably recognizes handwritten text including shapes, tables and drawings and converts them into digital information that can be sent with one click to email clients, text editors or spreadsheets. MyScript Notes helps users to work more efficiently by allowing them to easily organize and share their notes for further use.

We are very pleased to see more and more pen input device manufacturers choose MyScript Notes to enhance the value of their note taking solutions, said Jean-Marc AÃƒÂ¯choun, VP Sales and Marketing of Vision Objects. This new release, available in a wide range of languages, including for the first time a Cyrillic language, will enable new users across the world to take notes on the move, using natural handwriting, and share information electronically with other people.