The fun Android and iOS game My Singing Monsters has continued to gain popularity over the past year or so, not to mention more monsters are introduced periodically. For all those looking to find a little help when it comes to breeding monsters, rares, and other limited characters we have a few tips and tricks below. We can help you get the Shugabush, Reebro and more.

These days there are countless games for Android or iOS smartphones and tablets that are very popular, so much in fact that they have millions and millions of downloads and daily players. Clash of Clans or Candy Crush are two that come to mind, but My Singing Monsters is another fun and cute game for kids, or parents. People of all ages love it, and we have some tips for you below.

With My Singing Monsters users have a wide array of different characters (or Monsters) available to breed or buy, and often times it’s quite difficult to get them. Once you do the songs and noises they sing are rather fun, and the tunes get better and better. Frustrated by trying over and over again, waiting hours only to get the wrong monster? Read on for a few tips, tricks, and breeding charts to help you get the right item you’re after.

First thing you’ll need to know about My Singing Monsters is that every single monster can be bred. You don’t have to spend your money, buy diamonds, or do anything crazy to get them. That being said, some will take multiple tries, patience, and lots of time. Many of the bigger four element monsters take 24 hours to breed, and another 24 to incubate, and some of the higher rares or legendary monsters will take 34 hours. Yes, this is time consuming, so using the correct breeding elements is crucial.

Before we get started it’s worth noting that you’ll probably see some awesome islands of other players that are filled with plants, structures, walkways and other shrubbery. While this is nice, and a neat way to customize your game, food is far more important in the early stages and you’ll want to save as much money as possible on food to upgrade your monsters, which is required to breed, and then use the leftover money to remove trees or rocks to get more XP points, upgrade, and unlock more options.

Each island typically has around four or five different elements for monsters that you’ll need. These vary in name, but I call them Tree, Water, Wind, Rock and Snow. Then of course there are others once you advance in the game. On each island you unlock or buy, you’ll want to start with these first four or so monsters, as their elements are crucial in breeding more advanced monsters. One’s that will make you more money. Breed a tree with a water, and you’ll get a two element monster, then breed that with a one element monster and you’ll get a bigger, better, money making three element monster. Then of course are the big guys. Like Deedge, Riff, and others that are four element monsters. 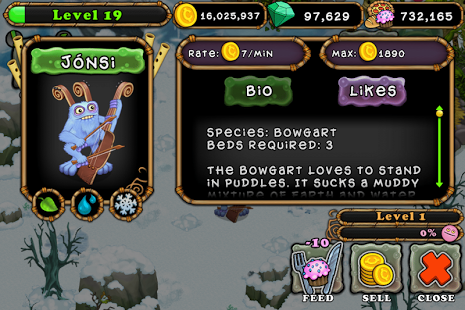 The four element ones are the hardest to get, will take multiple tries, but will be worth it. You’ll then need to breed a four element monster with any three element monster to get some of the legendary or rares. Things like the Ghatz, Reebro, and many other fancy characters.

Once you’ve bought two different elements, don’t buy any more. Next up you’ll want to buy a breeding station, and breed any and all monsters for free from here.

Save up your money and buy a breeding station on each island, then buy a bakery to make food. You’ll need to feed the first two monsters to level 4 before you can breed. Once done, start mixing elements to get new monsters, bigger monsters, make more money, buy more islands, and so on. Feed any monster to level 5 and they get bigger, and make more money. They increase in size at 5, 10, and 15.

One of the biggest tips we can give you when it comes to breeding four element or legendary monsters is to have friends that can light your wishing torches, as these will increase your odds. The game developer claims legendary monsters are hard to get, and you have a 1% chance of getting them. However, it only took me about 6 tries with 5 torches lit to get the Reebro, but your mileage may vary.

Once you get going, $10,000 coins for a wishing torch isn’t a lot, and put as many as you’d like up. We’d recommend at least 2-3 to increase your odds with breeding, but to each his own. It’s also worth noting that breeding stations will almost always select the lower of the two monsters if you’re mixing two that have the same element, so choose wisely, or else risk waiting possible 12 or 24 hours before you can try again.

Speaking of breeding, for a detailed breakdown and chart of what’s available, check out this list.

Now we know you all probably have most of this figured out already, and you’re probably looking for how to get some of those harder monsters. Things like the Shugabush, Reebro, and many of those other special characters.

Legendary monsters are extremely rare and hard to get. So much in fact that many give up because YouTube videos suggest you have a 1% chance of getting them. This isn’t quite accurate, and within a few days of trying you’ll likely get what you want. So long as you have some wishing torches and do the right combinations.

The Shugabush is the only special monster that doesn’t take a four element combined with a three element. Instead it takes two three element monsters on the first Island. To breed a Shugabush you’ll need to breed the Bowgart (blue violin monster) with the Clamble. As long as they are level four you can try this combination, and any level and any side works. It doesn’t matter. However, we’ve noticed you’ll have better luck using higher level monsters, and hitting the “retry” button in the breeding station to keep trying over and over again, rather than hand-picking them each time.

Once I started hitting retry, I got the Shugabush after about six tries. I probably tried 7-8 times before that with no luck, but I also didn’t have any wishing torches lit. So make friends and have them light your torches, feed your animals, and hit the retry button until you get him. You’ll know you have the Shugabush (or any legendary) because the incubation time will be 1:10:100. Which is 1 day and 10 hours, or 34 hours.

Getting some of the others are even more difficult than the Shugabush, as they require any four element monster which are already hard to breed, and a three element monster. The Reebro takes Riff the orange guitar guy, and the pink Pom Pom girls. Wandering through multiple channels on YouTube will help you learn more about breeding, and here’s a video with plenty of great information.

Once you get more advanced in My Singing Monsters and start getting all the four element and legendary monsters, you’ll want to teleport them to other islands, use the Ethereal Island, and make some of the truly unique and hard to acquire monsters. Here’s a quick list of formulas for a few of the most popular ones.

Of course in the end the developers want you to grow impatient and buy diamonds with real money. However, you can also earn diamonds by watching videos, downloading other games, and other things in the TapJoy menu inside the game. Be sure to use caution here and don’t give out any information you wouldn’t give to a stranger.

Personally I want for the 2x or 4x weekends for earning diamonds or coins, then start downloading and trying trial games, buying flowers for my girlfriend, or other things in order to earn extra diamonds. These can then be used to speed up breeding and incubation, or to outright buy some of those hard to get monsters you’ve had no luck getting.

All said and done it’s all about having patience, using the right combinations, and trying over and over again. I already have the Ghatz, Reebro, and Shugabush, and I’ve only been trying for about a week. This may sound like a long time, but the game is fun and will entertain you for hours on end, or keep the kids busy. The YouTube channel above has tons of great information, tutorials to breeding other monsters, and more, so be sure to check out the rest of his clips.