As I mentioned in this post, rumors and speculation about Apple releasing a smaller iPad or a larger iPod Touch have gotten white hot. So much so that if Apple surprises and doesn’t release something in this vein then we’ll have a bit of a crazy time separating the fact from the fiction and the back-trackers from the predictors.

For quite some time I’ve been one of those who didn’t think Apple would go down the smaller Tablet path. I still have my doubts when it comes to this year. The iPad continues to dominate the Tablet market and probably will for some time, even though we’re seeing some encroachment from other Tablet wannabes. Even if Google and its Android buddies continue to succeed with Jelly Bean Tablets and Microsoft makes some inroads with Windows RT, Apple, in my view, would still have a gigantic lead in the market that would take at least a couple of cycles to significantly diminish. And that of course assumes Apple would just stand pat. The chances of that are slim. 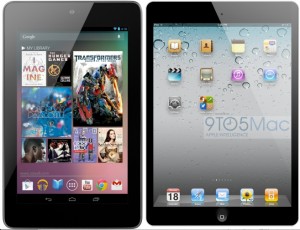 But I’ve been reevaluating my thoughts. My thinking has actually been hinting at this for some time now. I’ve been saying that beyond processor bumps and display improvements we really won’t see any dramatic innovation in the physical Tablet form factor. Yes, someone can add a pen/stylus, or someone can add removable storage, or any number of small spec differentials. But by an large we’re stuck with rectangles (plastic or metal) with some sort of display (plastic or glass) that really depend on the software that runs the show. By and large the Tablets we have are the Tablets we will continue to have when it comes to look and feel. And I don’t see that changing any time in the near future.  (An interesting post by James Kendrick talks a bit about this as well.)

So, my thinking on this is centered squarely on marketing. Apple sees the smaller Tablet form factor as a way to continue introducing “something new.” It won’t be really new (thus the quote marks). But it will excite its fans and the market, while incremental changes to the larger Tablet form factor continue at their incremental pace. Apple will capture lots of attention and consumers will have some interesting choices to make.

Of course all of this could come to naught if Apple isn’t ready to roll out a smaller Tablet. But one thing I know for certain, if Apple does indeed roll out a smaller Tablet form factor this year it is going to be an interesting Christmas season when it comes to watching how consumers respond. It will also make for some interesting analysis regarding Apple, Amazon, Google and its Android buddies, and Microsoft come the first of the year. Here’s hoping things will be far different than they were at the end of 2011.