WizTiles is an application that you can download from the Windows Phone Marketplace to change your start screen’s tiles. The beauty of this app is that you don’t have to unlock your phone to get some customization. One of the complaints I have gotten from a few Android friends of mine about Windows Phone is that it’s similar to iOS in that you can’t really do anything fancy without jailbreaking/unlocking. That’s still the case for the most part, but this app is definitely a step in the right direction for people wanting to tweak without busting into the OS.

Make sure to read on for a super long video I did showing off this app. I apologize in advance for how long and drawn out the video is, but I had to show this one off properly. 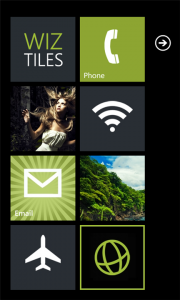 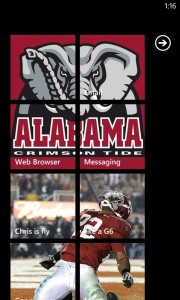 On the left is a sample from the developer and on the right is a theme I created this evening. Roll Tide!

You can download version 1.0 of the app @ the Windows Phone Marketplace now.

Who says Windows Phone Tiles are boring? Customize the look of your home screen with WizTiles.  Create any color, use any icon, any picture, and load your own themes to create shortcuts to basic phone applications.  Wiztiles support numerous tasks and shortcuts, and more are being added every day.  Wiztiles are alive and flip to give you more information about the custom tile you created.  Wiztiles can be used as links to your favorite sites or web applications.  For example, create a custom YouTube tile to use as a shortcut to m.youtube.com.  The possibilities are endless!

The app is definitely a step in the right direction for Windows Phone customization, but this app still has some work to do. I am very appreciative of the hard work the developer has put in already, but I am waiting for some more abilities and for them get rid of the intermediate wiztiles splash screen. I want to see more applications available to map to the tiles. I want to see a $3.99 – $5.99 price tag to kill the ads. In the developer’s defense, he knows about all these complaints and has plans to take care of them.

Here’s the video I promised, all 22 minutes of it. Yes, I know I spelled the app wrong on my splash screen. Thanks.

Like I said, you can download this one on the Marketplace right now. For more information on creating themes or to follow the progress, here’s a thread created by the developer on XDA with links to download a sample theme as well as a PSD for creating your own icons. You can also visit the website for WizTiles.