Touchscreens aren’t new to cars, but just like on our phones and tablets, the screens are getting larger and the user interfaces are getting better. The new MyFord Touch system is an evolution of the voice controlled SYNC system which we reviewed last summer, adding in a touchscreen and easy access to smartphone apps like Pandora without the need to touch your phone. 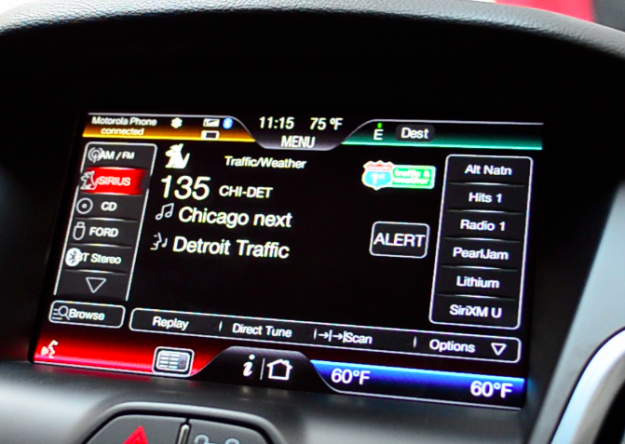 The new MyFord Touch is designed to deliver an easy to use in-car touchscreen that allows you to keep your hands on the wheel and eyes on the road much more than in a standard car by adding an easy to access touchscreen and voice control from Nuance that can learn from your commands.

One of the cool things about the MyFord Touch System is that Ford has turned to primary colors and the four corners of the screen to allow for easy access to your main controls — Music, Navigation, Phone and Climate Controls.

Wherever you are in the MyFord Touch system, you can easily access these main controls to get where you want in the system. The real magic comes form the marriage of voice and touchscreen technology. In talking with some futurists in attendance here at Forward with Ford, they expect Kinect-like motion gesture controls to in-car systems and phones.

Ford has paid a lot of attention to voice, and how it can interact with the system. Ford has worked with Nuance to deliver the voice control in Ford SYNC and MyFord Touch, allowing for a flatter command system that understands aliases and can adapt to the user.

Brigitte Richardson, Lead Engineer of Ford Global Voice Control and Technology and Speech Systems, told GottaBeMobile that the SYNC system can deliver a 50% improvement in recognition after just 3 commands. Additionally, Ford has set up SYNC to allow users to access commands from wherever without first saying “Directions” or “Phone” so that it is easier to do what you want.

Finally, the use of aliases has allowed Ford to “understand” what you want, even if you don’t remember the exact phrase that the system prefers. For example, saying, “Where is the cheapest gas” will return fuel prices, just like the official command of “Fuel prices” would. This seems small, but if you have used traditional systems you will appreciate the flexibility.

While we typically focus on smaller touchscreens, it is exciting to see the works and partnerships that Ford is developing. We can definitely see the combination of voice and touch becoming a bigger player in tablets and smartphones.