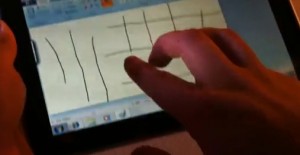 The formerly anonymous leaker of the HP Slate revealed more in a new YouTube video. He showed us the pen, the number of fingers it can recognize, and the webcams, front and back.

Our “mystery” man x313xkillax showed off the box, clearly labeled “HP Slate”. The specs match up with what we’ve previously seen, including Intel Atom processor and 64 GB SSD. He points out he has the business model and mentions there’s also a “consumer” model, but he didn’t have any info on that.

The big reveal was the pen and four-finger touch input, which means it’s an N-Trig digitizer. Pen looked a little chunky to me, but since there’s no pen garage (tether only), it makes sense for it to be thicker and tougher. The screen rotation triggered by accelerometer looked smooth, but he only showed it with the bare desktop; the real test is seeing how quickly windows become usable. Some good info confirmed but looks like he’ll be feeding us more bit by bit.

Side note: for a guy who seems anonymous, this x313xkillax sure isn’t camera-shy. Aside from briefly showing up on the front webcam, he showed up in the screen reflection pretty clearly frequently. I don’t know if this guy is supposed to showing off the Slate or what, but it’s a weird situation.

Thanks to Syn for the tip