NASA gives the iPhone a nose for danger 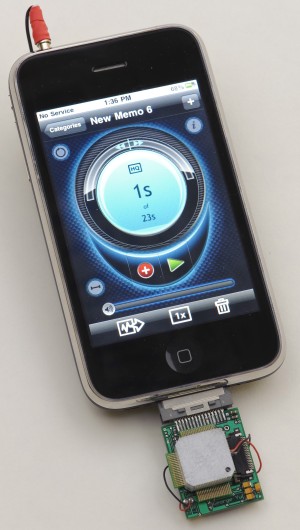 Ever wonder if the levels of poisonous gas in the air are approaching dangerous levels? Worries me every day (usually first thing in the morning then a couple more times after breakfast). Fortunately, the folks at our great space agency, NASA, share those same concerns and have developed a low-cost way to detect airborne ammonia, chlorine gas and methane. The fun part? They’ve stuck it on to an iPhone.

The device [Jing] Li developed is about the size of a postage stamp and is designed to be plugged in to an iPhone to collect, process and transmit sensor data. The new device is able to detect and identify low concentrations of airborne ammonia, chlorine gas and methane. The device senses chemicals in the air using a “sample jet” and a multiple-channel silicon-based sensing chip, which consists of 16 nanosensors, and sends detection data to another phone or a computer via telephone communication network or Wi-Fi.

Obviously still in the prototype stage, but it’s only a matter of time until the chemical sensor goes the velcro route and finds itself strapped to my waist. And then only a short time after that when we’ll have phones telling us to brush our teeth or suck on breath mints. Thanks, NASA!