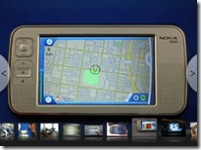 We have covered the N800 in the past, and we have also covered the use of a UMPC as a GPS device.  Now, it looks like we have both  of them together in one – Using the N800 as a GPS device in the car.  Over at Tabletblog.com they have a series of 3 videos posted of the unit being used as a navigator.  These videos take the N800 with the NAVKIT thru it’s paces using the Navicore software.  He give a nice overview of the software, in car setup and a long video of it in action.

To sum it up in his own words: