As a big fan of basketball and the NBA 2K series of video games, I had high hopes for NBA 2K13 for iPhone and iPad. And while it certainly won’t be replacing NBA 2K13 on my Xbox 360 any time soon, NBA 2K13 is a nice alternative for those that don’t want to spend the money or are craving a basketball game when not in the presence of a console.

NBA 2K13 is the latest edition of 2K Sports’ basketball simulation series and it comes fully equipped with a host of likeable features including quality game play and some deep modes that are often hard to come by on portable devices. By no means is NBA 2K13 a perfect game mobile game, but it’s certainly the best option available for those looking to immerse themselves in the NBA experience.

As someone who has owned every single NBA 2K game that has ever graced the planet, I want to heed a warning. Do not buy this game thinking it’s going to be like the Xbox 360 or PlayStation 3 versions of the game. It’s not. However, that doesn’t mean that it’s a completely stripped down version of the game. It’s not that either.

For what it is though, which is a mobile version of NBA 2K, it’s compelling, fun and worth your money.

The main part of NBA 2K13 is obviously playing the sport of basketball. Yes, there are plenty of other things to do but when it comes down to it, it’s a basketball game and a fun one at that.

It’s a mobile game and the player models won’t blow you away but most of the players look relatively similar to how they would look in real life. Bigger stars look closer to their likeness with guys like Lebron James and Kevin Durant looking better than your average player like Andrew Bogut or Marcus Thornton. And some of the character models, I’m looking at you Ron Harper, look down right awful. In other words, it looks good for a mobile game but don’t expect to be completely blown away. 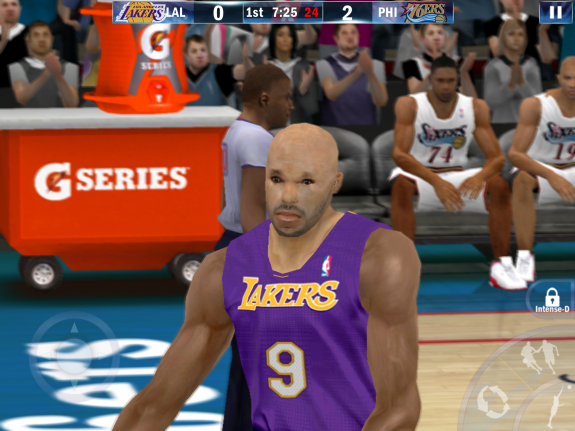 The announcers are pretty solid, but not amazing, and don’t provide the kind of depth that owners of the console will know and love. They make accurate quips and provide a bit of relief from the game sounds.

Users can choose from a host of game modes, one of the strongest features of the game, including Quick Game which allows you to just play a quick exhibition game, a season mode that allows for multiple entries, and a mode called Greatest Games which allows you to step in the shoes of the likes of Allen Iverson as you attempt to recreate signature moments of the NBA’s biggest stars. 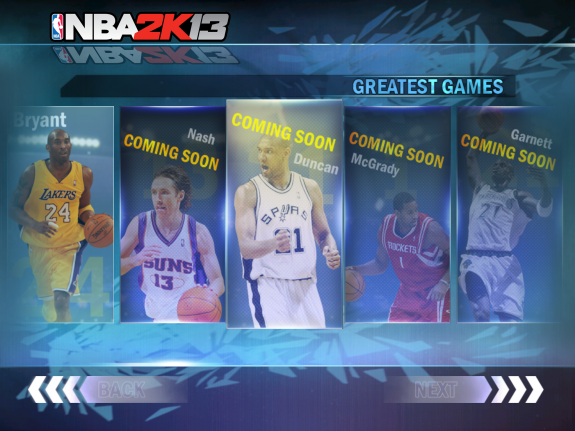 One of NBA 2K13’s strengths is its re-playability.

The fact that 2K Sports was able to include these modes ensures that NBA 2K13 isn’t a game that you will put down after a few days of playing.

As for the actual game of basketball in NBA 2K13, it’s both fun and addicting. Whether you’re cutting to the hoop with Iverson or swatting the ball with Dikembe Mutombo, it feels fluid. If players are bumped on the way to the rim, they’ll fall down. Players will also attempt to get open for you by making cuts and moving around the floor.

The AI is a challenge as it will run back door cuts and utilize its offensive and defensive weapons effectively but I was still able to shoot and pass effectively. Defense is a much harder challenge as keeping up with the computer players is often difficult to do given the control schemes.

The soundtrack is also good as it was produced by Jay Z and features some classic songs.

Performance-wise, the game didn’t slow down a single time that I played it and the buttons, menus and on-court action were as fluid as I’d expect from a game on Apple’s iPad. The new iPad fourth-generation should offer even better performance too.

In NBA 2K13, there are two control options. One is the Classic Mode where you maneuver your players using a virtual joystick and pass and shoot using buttons off-set on the other side of the screen. This is my preference as the One-finger Mode takes away your control over the game. Instead of being responsible for all facets on the floor, the One-finger Mode limits you to shooting, passing stealing, and blocking the ball using gestures. 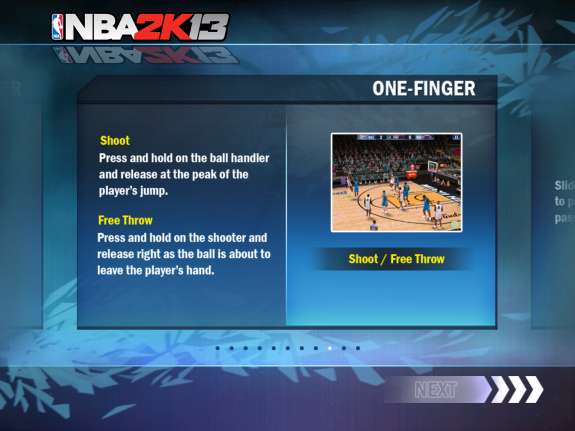 Not as easy as it sounds.

It’s a good idea but it can be a hassle especially when trying to pass the ball. I often tossed the ball to the wrong player which ended up leading to points for the other team.

The Classic Mode is a little bit easier to adapt to though there are still issues. One issue I had was that the buttons are so close to each other than I often would press in on spots in between which would mean that actions wouldn’t register on screen. It’s even harder on the iPhone 5.

I also found that even on the hardest difficulty, it’s extremely difficult to miss shots with some players. There were a few games where I used Michael Jordan where I shot over 80% from the field. While that might happen on occasion, happening several times takes away from the realism that this simulation is supposed to provide.

NBA 2K13 for the iPad is not a perfect game but that doesn’t mean that it isn’t a fun game. The game play is addicting and perfectly paced for a basketball simulation and the modes that the game offers will keep users entertained until NBA 2K14 arrives. 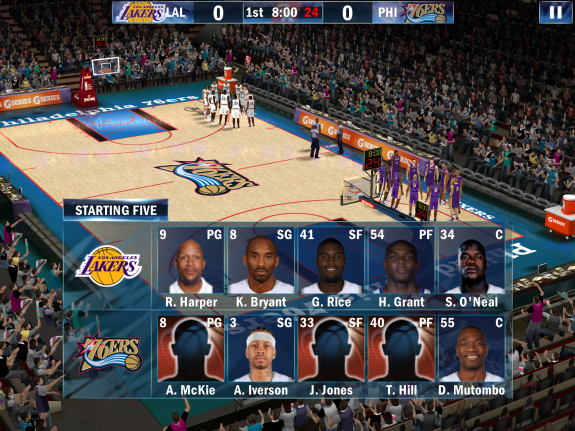 At $7.99, and the ability to download it across devices, it’s an easy recommendation for those who love the NBA and basketball in general.