The NBA 2K15 release date arrives this week, bringing big new features to this highly anticipated basketball game for the PS4, Xbox One, PS3, Xbox 360 and PC. Here’s a look at 11 things NBA 2K15 players need to know about the game and the NBA 2K15 release.

With no NBA 2K15 demo to play, gamers are eager to see how the game plays, including how the new animations and features handle on the court.

There is no need to pre-order NBA 2K15 if you only want it on release day, but if you decide to place a NBA 2K15 pre-order you unlock a set of special bonus items for the MyTEAM mode.

Here’s what you need to know to get ready for the NBA 2K15 release date.

Keep reading to learn what you can expect on the NBA 2K15 release date, what buyers need to know and other important information about this game. Even though older consoles get NBA 2K15, the team focused on delivering unique experiences to the newer consoles last year and we expect a similar gap in features this year.

The NBA 2K15 release date is October 7th on all consoles and on PC. There is no chance that stores will sell out of NBA 2K15 on the release date, so don’t worry if you want to stop on your way home from work to buy the game for yourself or a kid.

If you aren’t getting in line at midnight you won’t likely even run into a line for the NBA 2K15 release at most stores, other than the regular line to pay.

2K Sports includes a NBA 2K15 pre-order bonus based around cover athlete Kevin Durant. If you pre-order NBA 2K15 at any retailer you should get the KD MVP bonus pack. This includes the following;

These bonus options are also available if you buy NBA 2K15 digitally.

In NBA 2K15 you can play as yourself, without spending an hour customizing an in-game character the old-fashioned way. Instead you can use the PS Camera or the Kinect to scan your face into the game. The results are pretty impressive and it’s a cool way to get into the game.

The camera on these sensors identifies thousands of data points to put your face into the game. Check it out in action. This is only available on the PS4 and Xbox One.

Although there are publications already playing NBA 2K15 live to let buyers see what the game has to offer, there are no NBA 2K15 reviews live yet. This isn’t a bad sign for a sports game, but it certainly leaves some potential buyers on the fence instead of jumping into NBA 2K15 on release day. You can check out MetaCritic to see the NBA 2K15 reviews start showing up soon.

There is no NBA 2K15 demo available on any platform and you shouldn’t expect to see a NBA 2K15 demo arrive after the release either. Often the teams need to decide between making the full game better and using resources on a demo and they choose to make the end product better.

If you choose NBA 2K15 on PS4 and you are a PS Plus member you get an extra bonus MyTEAMpack and another 10,000 bonus virtual currency. This is in addition to a Playstation Exclusive The Stage.

The Stage allows users to wager VC with other players, and including the option to wager up to 45,000 in virtual currency on one game. This is only exclusive for 30 days.

You can head to most GameStop locations for a midnight NBA 2K15 release event. A quick check shows every GameStop near us is open at 9 PM to start completing orders and will remain open until 12:31 AM local time for the midnight release.

Starting at 12:01 AM local time on October 7th you can buy the game at GameStop and head home to play. 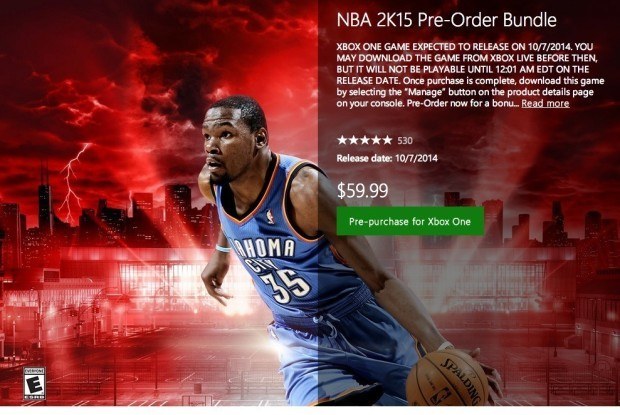 Here’s when you can play the digital NBA 2K15 release.

You can pre-order the digital NBA 2K15 release and pre-load it on PS4 and Xbox One right now.

Best Buy offers a $10 Reward Zone gift certificate when you pre-order the game and are a My Best Buy member. This is the best NBA 2K15 deal available right now.

Last week a NBA 2K15 deal chopped $25 off the price of the game with a gift card, but it is no longer valid. It may take a few weeks before we see any more real NBA 2K15 deals.

Even though you can’t play NBA 2K15 yourself or read NBA 2K15 reviews just yet, you can still watch others play. The video below is a recording of a live NBA 2K15 gameplay session with the developers of the game. It’s a great intro to the new features and commentary on the game.

If you want to see who the best NBA 2K15 players are you need to see this list of NBA 2K15 player ratings. Organized by team, CBS Sports shares the ranks of all the top NBA 2K15 players. This includes Kevin Durant at 95 and Lebron James at 98 as well as many other superstars.