The Nectar Mobile Power solution is a cartridge based charger that turns Butane into power capable of keeping your iPhone or Android tablet going for up to two weeks without a wall outlet.

The small portable charger runs on $10 cartridges, each of which is able to charge the iPhone 10 times, which the company says will let the average user go two weeks without the need to find a power outlet.

Nectar Mobile Power systems pair a cartridge capable of delivering 55,000mW-hours in a single  cartridge. The Nectar is ready to charge gadgets instantly, and users can quickly swap out cartridges to keep charging. When a cartridge is empty, place it in a recycling bin and snap a new one in place to keep going. 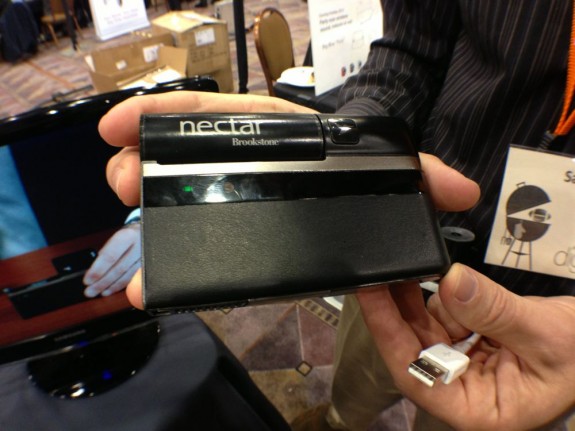 The small Nectar cartridges hold butane, a combustible gas which the small system turns into electricity to charge gadgets. The system is small enough to use around town, but is better suited for campers, hikers and travelers who would otherwise need to travel miles to re-charge an extended battery or carry a bulky solar charger.

The system is cleared for carry-on and use in airplanes, so users won’t end up stuck without power ont eh go, and they shouldn’t face problems with airlines or the TSA when taking the Nectar on their next trip.

The Nectar arrives in Summer 2013 exclusively at Brookstone. The Nectar Mobile Power System retails for $299 and the cartridges are $9.99 for two weeks of power. Brookstone will start taking orders later this week with a free cartridge.