Neil Gaiman, famed author of many novels, and graphics novels, will venture into the world of video games for the first time later this year with his game Wayward Manor.

The new game follows the story of a ghost who occupies a large New England mansion where he just wants peace and quiet. Players will use their ingenuity and wit to help the ghost scare away those who try to take up residence in the manor.

As players learn more about the occupants of the manor, they will find out more about the ghost that haunts the place. While the first game takes place in 1920s New England, the protagonist died some 40 years earlier in the 1880s. Someone murdered the ghost, and they had a reason to do so.

In an interview with Mashable, Gaiman revealed that his original idea would show the story of a man and the house over the course of 200 years. Possible subsequent installments of Wayward Manor would continue the story from the 1920s onward into the future as the ghost learns more about himself and the house.

Movies such as Arsenic And Old Land and The Man Who Came To Dinner inspired Gaiman to create the story, and the game sounds like an appropriate mixture of slapstick and light-hearted humor. 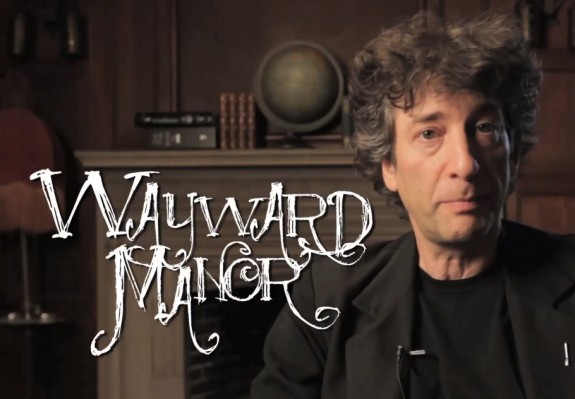 Wayward Manor is currently in development by The Odd Gentlemen, the studio behind The Misadventures of P.B. Winterbottom, a PC and Xbox 360 game with a unique time travel mechanic. That game showed the studio is capable of the sort of tone Gaiman wants from Wayward Manor, which is promising.

Wayward Manor won’t come out until sometime this fall, but interested gamers can pre-order the game now along with some perks. The perks include high-resolution wallpapers, the game soundtrack, an invitation to the launch party and even a dinner with Neil Gaiman for those who have $10,000 just lying around. The perks are similar to a Kickstarter project, but without the risks of Kickstarter.

The game will come out on tablets, Mac and PC later this year.