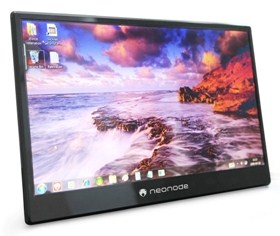 Straight out of Stockholm, from Neonode comes the zForce Pad, an infrared touchscreen solution for screen sizes in the 5- to 13-inch range. Offers low cost, low power consumption, multi-touch capability and above its competing technologies, 100% screen transparency.

zForce uses a small frame around the display with LEDs and photoreceptors on the opposites sides hidden behind a infrared-transparent bezel. A controller sequentially pulses the LEDs to create a grid of infrared light beams across the display.

Pretty cool stuff. They advertise their product as being ideal for phones (with large screens), MIDs, Tablet PCs (no reason an active digitizer can’t be mounted beneath the screen), and more. Full press release below. Hat tip to Slashgear.

Neonode’s latest reference design, zForce Pad, is aimed squarely at companies who develop and sell touch screen based mobile internet and computer devices such as tablet-PCs and iPad-like products. zForce Pad offers a number of advantages compared to existing technologies: 100% transparency (no overlay needed like in resistive or capacitive), low cost for complete touch screen solution, ultrathin design, outstanding finger touch experiences (multi-touch support for gesture like pinch to zoom), integrated ambient light sensor for self adjusting backlight levels and lower power consumption and much more.  Products based on the zForce Pad touch screen reference design are already being developed by Asian companies.

“The market for this type of products is booming and the touch screen solution is destined to be a vital part of the success of this market. We developed the zForce Pad platform together with companies in the mobile internet and tablet PC device industry and we are confident that it will play an important role in the development of the market. The feed-back from the companies we presented zForce Pad to at the recently completed 3GSM World Mobile Congress in Barcelona, Spain, was very encouraging.” said Thomas Eriksson, CEO of Neonode Technologies AB.

Pictures and a video of zForce Pad integrated in a demonstration product are available on Neonode’s website, www.neonode.com/zforce-pad/demo.