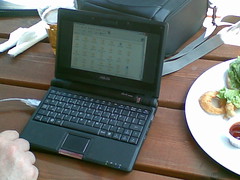 industry.  Here is a brief summary:

Read more about netbooks from the GBM team.  Are you sick of the netbook craze yet?