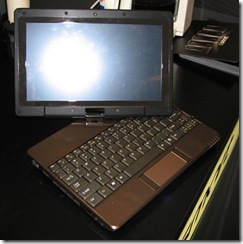 Mobile World Congress 2009 wrapped up today, and buried deep within the myriad of phone related announcements lies  this little gem of a convertible tablet PC. Gigabyte, famous for their MIDs and UMPCs, announced an update to their M912 with the TouchNote M1028. It sports a 10″ screen in the classic netbook form factor but adds convertible tablet functionality with a swiveling touchscreen. The specs aren’t anything to write home about as it runs the now-standard Intel Atom N270 processor at 1.6GHz, 1GB RAM, 160GB hard drive and Windows XP, as reported by itechnews.net.

Why do I think netbooks might play a role in turning the tablet PC into a mainstream machine? Netbooks have taken the industry by storm and it seems like everyone but Apple is primed to release or have already released their own iteration of the low-cost device. This year’s CES was pretty much a dud for the convertible Tablet PC but fortunately, and something that caught us mostly off-guard, there was a unique netbook tablet PC from Asus in the form of the T91 and T101 sporting a swiveling 8.9″ and 10.1″ screen respectively.

Currently, companies releasing netbooks often get overlooked as the novelty of the device is wearing off and the standardization of hardware induces yawns across the blogosphere. OEMs have tried a variety of tricks to set their device apart, be it a lit up touchpad on the MSI WInd U120 we saw at CES, the Vivienne Tam edition of the HP Mini 1000, or the custom cases of Athena’s ArtPC, but these “features” are merely cosmetic and do not enhance functionality at all . With the introduction of Asus’ T91/T101 and Gigabyte’s new introduction, perhaps the pervasiveness of the netbook market will finally break the tablet PC into the mainstream.