Years ago when I was running a small theatre in a small town, the mayor of that town wanted to add a $1.00 tax (he called it an entertainment surcharge) for every ticket our customers purchased to the theatre. Naturally we weren’t amused. As it looked like the measure was going to pass through the town council, we let it be known that if the tax went through we would print a message on each ticket that said, “This $1.00 Tax Brought to You by Mayor (I won’t print his name)” and alternating that message periodically with the name of town council members. The measure failed.

It looks like Netflix is trying a similar tactic in its ongoing battles with Internet Service Providers, with Verizon as a target, at least initially. Some users reported seeing an error message on the screen when their Netflix feed slowed down or became unusable. The message states “The Verizon Network is crowded right now. Adjusting video for smoother playback.” 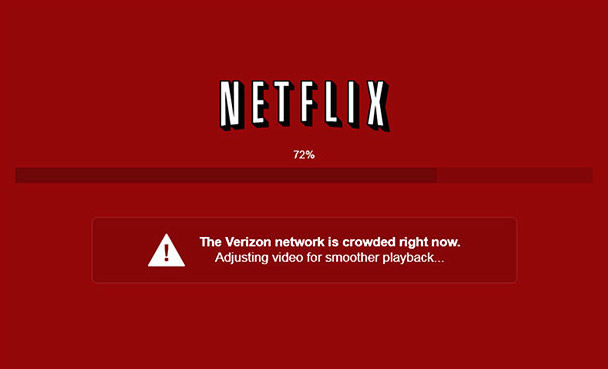 As you can imagine Verizon is none too happy about this. In fact they’ve fired back at Netflix, first calling this “a PR stunt”, “misleading,” and “inaccurate.” Verizon claims that Netflix is “willing to deliberately mislead its customers so they can be used as pawns in business negotiations and regulatory proceedings.”

Then later in the day yesterday Verizon slapped a Cease and Desist order on Netflix saying, “There is no basis for Netflix to assert that issues with respect to playback of any particular video session are attributable solely to the Verizon network.” Verizon is threatening legal action if Netflix doesn’t comply and also wants Netflix to turn over a list of customers who may have seen the error message. Netflix says it has been testing the message since May.

It doesn’t take a lawyer to parse Verizon’s statement to understand that this is a big PR battle. Sadly, it is also one that, for consumers, won’t easily be resolved. It’s all about that one word in the Verizon statement: “solely.”

You see the problem that Netflix faces in its battle with Verizon, Comcast, and other ISPs is that there can be a variety of roadblocks along the path that brings Netflix content (or content from any other source) to your screen. Verizon, of course, is claiming that the problem is on Netflix’s end. But unfortunately for Verizon it falls prey to the same confusing jumble of potential streaming disruptions that Netflix does. But what does the consumer see? Verizon is the culprit.

Verizon (and other ISPs) are put in the position of fighting this issue carrying the heavy baggage picked up along the way that sees consumers annually saying they despise ISPs. ISPs such as Verizon, AT&T, and Comcast rate about the same level of disgust as the IRS. Whether Netflix is right or wrong on the issue, Netflix is cleverly using Verizon’s poor consumer reputation against it.

Netflix, through a PR spokesperson on Twitter, claimed that it is testing the notifications as a form of transparency to “keep members informed.” In a fuller statement Netflix said:

Based on reports it sounds like Netflix’s intent is to threaten to use these sorts of notifications on other broadband providers as well. Verizon is obviously not going to take this lying down, and thus the Cease and Desist order ratchets up the stakes.

Now, some GBM readers might remember that Netflix agreed to pay Verizon directly for better quality streaming over its network. That followed a similar paid agreement that Netflix struck with Comcast. Netflix, in both cases, has consumer sentiment on its side and both deals were largely viewed as Netflix succumbing to a version of broadband blackmail in order to keep its customers happy. After paying off Comcast, Netflix content streams on that network reportedly improved. We’ve seen no such data yet after the Verizon deal.

Netlfix’s argument is that the consumer is already paying the broadband provider through monthly subscription fees to receive content from the Internet and that ISPs are “double-dipping” when they insist that content providers pay to have their content successfully streamed onto consumer screens.

In reality neither side’s argument is easy to prove. But in a PR battle that doesn’t necessarily matter. Netflix has already laid the groundwork for this by beginning to publish a rating sheet on broadband provider performance called the USA IPS Index. That might have more than a PR benefit if customers had a real choice among providers, but in may places they do not.

Keep in mind, that in any enterprise, informing customers with any degree of real transparency is never a goal when business interests are at stake. That’s just business. Perhaps Netflix should stick to its guns and force Verizon to take it to court. If that did occur, we might actually get to catch a glimpse behind the curtain and be able to discern who the real victim (besides the consumer) in this high stakes broadband battle is.

The screen grab in this post is credited to Yuri Victor.