Netflix Gets Retina Update, HD Streaming On the Way 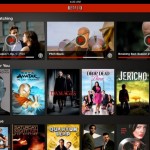 The Netflix app for iPad just got a lot better looking with a new Retina update that delivers high resolution artwork.

But, that’s not the best news.

Netflix announced that the company is working on bringing HD movies to the iPad.

Netflix has been streaming HD movies on the Xbox 360, PS3 and other connected devices for some time, but the iPad hasn’t had access to the HD streams yet.

Netflix made the announcement on Twitter, promising, that HD video will be added to the app, “later.”

Sadly that’s all the news they gave. So we might see HD Netflix videos on our Retina Displays as early as this month, or as late as a year from now. I’m hopeful that the update will come sooner rather than later.

The Netflix service on the new Apple TV will stream some shows in 1080P, so we know it is possible, at least for shows that Netflix has in the high-resolution format.

Don’t get too excited though. Most of the content on Netflix is in 720P or standard definition, especially older titles.

Hopefully the competition between Netflix, Hulu Plus and HBO Go will kick into gear and we’ll see higher resolution HD video sooner rather than “later.”

The ABC app, which we included in our Best Retina Display Apps roundup, already streams in HD, so you can head over there to catch up on your favorite ABC shows in HD.

Just don’t do this on your new iPad’s 4G LTE connection, unless you want to pay for more bandwidth. Streaming HD video eats up bandwidth much faster than watching on 3G.