Is there anybody out there that doesn’t have a Netflix streaming subscription on a least one device? You’d think not by all the reports of that say Netflix chews through Internet bandwidth like New Year’s Eve celebrants drink through cheap champagne offered for free. But Netflix must want to find out as it is offering a new promotion aiming to garner some newer customers.

According to a report in Adweek, Neflix is now offering a $6.99 subscription, which is a dollar cheaper than the current $7.99, for new customers. The other caveat is that you can only stream Netflix content to one device at a time. So the market may be the first timers and those who only have that one mobile gadget in their arsenal. Or at the least, those who want to save a buck a month and don’t need streaming on multiple devices. The new pricing structure also only features standard definition viewing, not high def. Note that this doesn’t seem to be heavily advertised on the Netflix site at the moment, so this might be a quiet roll out. 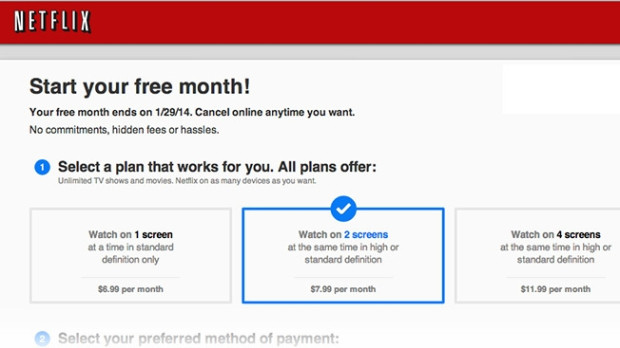 The AdWeek report says that this is a test of a new price point and service that might roll out more broadly in the future. Netflix has 40 million or so subscribers and there is some wisdom in seeking different entry price points given how many different ways consumers use mobile devices as well as view home entertainment.

By the way, as of the New Year, some content will no longer be available on Netflix as contractual arrangements with content providers expire. Here is a list of some of the 470 titles that will no longer be available in your watch list in the New Year. Keep in mind they may return at some point. Netflix has been making it increasingly difficult to find out what content may be expiring.

Eternal Sunshine of the Spotless Mind
Do the Right Thing
Can’t Hardly Wait
Miller’s Crossing
Being John Malkovich
Breakin’ 2: Electric Boogaloo
Half-Baked
Titanic
Braveheart
Requiem for a Dream
Dark Shadows (TV series-all seasons)
The Private Life of Sherlock Holmes
The Long Goodbye
The Kids in the Hall (all seasons)
War Games
The Young Girls of Rochefort
We Were Soldiers
Top Gun
Serpico
Capote
Born on the Fourth of July
The Secret of Nimh
Roman Holiday
Platoon
Brick
Session 9
Intolerable Cruelty
Foxy Brown
Flashdance
Dressed to Kill
Heaven’s Gate
Man on the Moon
As Good as It Gets
What Dreams May Come
Desperado
Body of Evidence
In the Name of the Father
Gallipoli
The Faculty
True Grit (John Wayne version)
Biloxi Blues
50 First Dates
Elizabethtown
Species
Species II
Saturday Night Live: The 2000s (available until 12/31)
Inside Deep Throat
Jarhead
The Great Train Robbery
The Andromeda Strain
Far From Heaven
The Mask of Zorro
The Odd Couple
The Best Little Whorehouse in Texas
Not Without My Daughter
Once Upon a Time in Mexico
I’m Gonna Git You Sucka
For the Love of the Game
In Like Flint
Romeo and Juliet (1968 version)
Jude
Seed of Chucky
Hard Target
Scary Movie
The Skulls
Tales From The Crypt: Bordello Of Blood
Tales From The Crypt: Demon Knight
Rob Roy
Remo Williams
Street Fighter
Back to School
Ned Kelly
High Art
World Trade Center
Windtalkers
Stop! Or My Mom Will Shoot
Troll 2
Pumpkinhead
The Woman in Red
October Sky
The Russia House
War and Peace
An Inconvenient Truth
A Shot in the Dark
Of Mice and Men
Cold Comfort Farm
Killer Klowns From Outer Space
Talk Radio
F/X 2
1492: Conquest of Paradise