How do you define “a generous period of time?” The answer is two years according to Netflix. As expected Netflix has increased prices for new users. The price hike went live today with a $1 price increase for any new subscribers. That means new users will be paying $8.99 a month instead of the current $7.99. When Netflix announced that price increase was coming last month in a letter to shareholders, it let current subscribers know a price hike was coming as well, with a rather vague statement that current subscribers would continue to enjoy the $7.99 rate for a “generous period of time.”

The price increase announcement comes with news that Netflix had now defined that “generous period of time” as two years. What’s not vague at all is that Netflix says it “guarantees” the current rate for that two year period. That’s a bold statement. 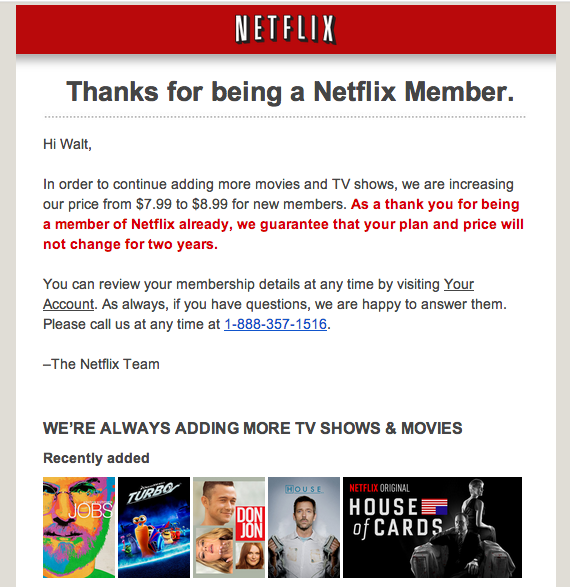 Current Netflix customers pay $7.99 to stream a large selection of moves and television content on just about any mobile device and platform that exists in addition to TV set top boxes like the Apple TV, Fire TV, and Roku. Some smart TVs come with Netflix as an option. In fact it is almost impossible to find a viewing experience that doesn’t offer some form of access to Netflix. There has been recent news that Netflix is talking with some cable providers to include Netflix on cable boxes as well.

Netflix’s statement is as follows:

To continue adding more movies and TV shows and delivering a great streaming experience, we previously announced that we planned to increase our price slightly for new members. That increase is happening today. We are increasing the price of our service by US$1 a month for new members. Existing Netflix members get to keep their current (US$7.99) price for two years, enjoying HD-quality movies and TV shows on any two screens at the same time.

On one hand that seems an odd way to market if you think about it. “Late to the party? Sorry, you’ll pay more.” But then again, it does reward those who have been on the Netflix streaming video bus for past loyalty. That is not something we typically see when companies go after new customers with special discounts that leave current customers wondering why they bought in early.

Netflix has a history of tinkering with price points for its video streaming service. Last December, Netflix had advanced a new campaign targeted at new customers for $6.99 a month. That content would be streamed in SD as opposed to HD and streaming would be limited to one device at a time. Current subscribers who pay the familiar $7.99 a month are allowed to stream to two devices simultaneously. There are many consumers who may not share the same home, but who share the price of a Netflix subscription account for video streaming. In April of 2013 Netflix launched a $12 a month plan that would allow users to stream on up to four devices simultaneously.

UPDATE: Netflix continues to tinker with prices by raising the price of the $6.99 SD streaming plan that only allows content on one device to $7.99 a month.

Netflix has previously justified the new user price increase of $1 publicly by saying it needs the additional revenue to continue to develop and provide original programming such as Orange is the New Black, Hemlock Grove and the award winning House of Cards, as well as to continue to sign deals for existing content. That original programming has brought many new customers to Netflix already, and it has shaken up the content creation industry. While original programming is not a new development in the online entertainment industry, other companies like Amazon, Microsoft, and Yahoo are making new noise about their efforts to develop original content.

The battle for older content, the majority of Netflix’s catalog, is also heating up primarily with Amazon. Both companies compete to have certain programming available exclusively on their respective services for a period of time. Amazon Prime subscribers can view some of that content “for free” after paying a $99 per year subscription fee.  With the new user rates in effect for Netflix, the price comparison will see Netflix subscribers paying $107.88 versus Amazon’s $99 per year. Current Netflix customers will pay $95.88 for each of the next two years. Amazon recently raised its Prime subscription rates from $79 a year to $99.

But the price hike also comes during a time when Netflix is in what amounts to open warfare with Comcast and other ISPs. Netflix has adamantly opposed the proposed Comcast acquisition of Time Warner Cable saying that it will give Comcast too much control over the market, creating an anti-competitive market place that would allow Comcast to manipulate pricing. Netflix has recently entered into arrangements with Comcast and Verizon to pay them directly to host its content instead of relying on a middle man approach to bring its content to customers. Netflix has flatly stated that it believes Comcast is “double dipping,” charging both Netflix and Comcast customers twice to deliver its content.

This open war of words between Netflix and Comcast comes as Netflix has become a leading voice in the renewed debate over Net Neutrality, in light of the FCC considering new rules changes that will have a profound impact on the future of the Internet, content streaming, and the rates consumers pay for content delivered through Internet Service Providers.