There’s nothing like a little humor at the end of a long day. Or to begin a new one, depending on when you read this post. Everyone got excited at the end of last year when Amazon began talking about its Amazon Drone delivery service called Prime Air, that features drones flying through the air to deliver packages to your doorstep. Netflix decided to get in on that act too. Well, not literally, but in a satirical spoof that shoots and scores at Amazon’s drone plans. 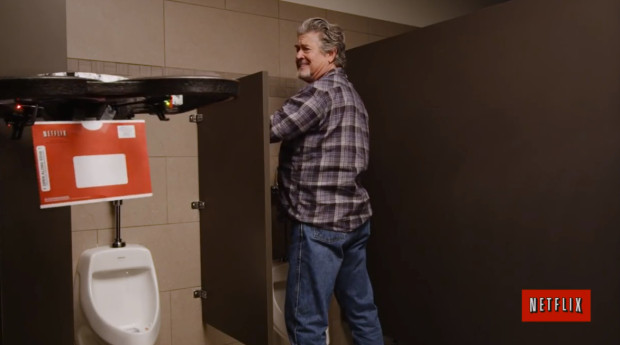 For those who think of Netflix as a digital content delivery service, remember that Netflix made its bones by delivering DVDs though the mail. Those red envelopes were everywhere spilling out of just about any mailbox you ran across, and filling up postal carriers mailbags. Well, the gist of the video is that Netflix is returning to its roots by taking off into the skies to deliver discs once again with its Drone to Home delivery service.

You have to love the claim that no matter where you are the Netflix drones will deliver your DVDs to you just minutes after you place a title in your Netflix queue. All in all it’s a cleverly done by the folks on the DVD.Netflix.com team, and I bet even the folks at Amazon got a chuckle or two out of this high flying satire.