The Netlix app for iPhone and iOS has been updated today with support for the iPhone 5 and iOS 6.

While this is fantastic for those that are using iOS 6 powered devices, the iDevice owners that should be most excited are iPhone 5 owners who can now take advantage of the device’s larger screen.

The iPhone 5’s 4-inch Retina Display offers 16:9 aspect ratio. This allows content, like a movie on Netflix for instance, to appear in a widescreen format. On previous iPhones, which sport 4:3 aspect ratio, there would normally be black lines where the content could not fill the entire screen. On the iPhone 5, those black lines are all but gone.

The app itself now fits the iPhone 5’s taller screen which makes for a much more pleasant browsing experience. 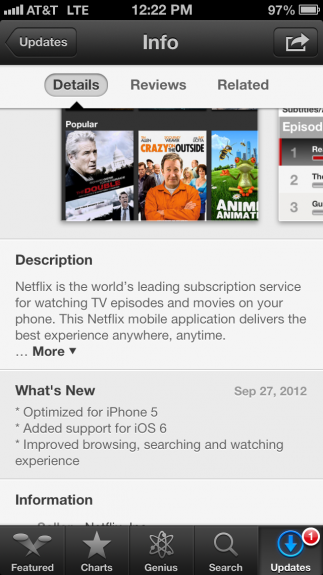 Netflix is now much improved on the iPhone 5.

In addition, Netflix says that the watching, browsing, and searching experience has been optimized which likely means that Netflix has tweaked these features to make them better not only on the iPhone 5 but on other devices as well. 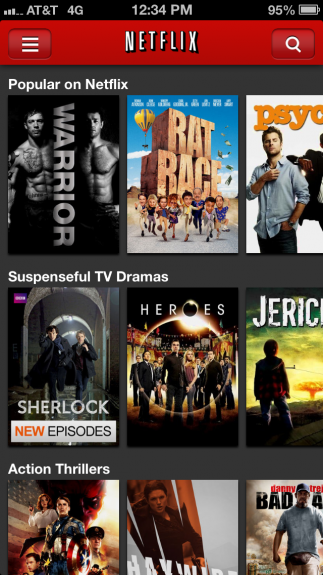 The iPhone 5 features 4G LTE data speeds, which offer data speeds that can reach up to 10 times faster than those found on typical 3G, and which makes them perfect for streaming widescreen content from Netflix while on the go.

With 3G, movies and television shows would often stutter when paired with cellular data, with 4G LTE, users will likely run into no such problems.

The Netflix update comes just under a week after Apple released the iPhone 5, the first iPhone with 4G LTE data and a 4-inch screen. The phone has been a hit with consumers thus far as Apple announced that it sold 5 million iPhone 5’s in its first weekend of existence.

In addition to those features, the iPhone 5 features a new design that offers both aluminum and glass, a new A6 processor, improved cameras, and of course, Apple’s new iOS 6 operating system.