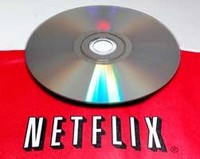 NetFlix, who many thought was in a death spiral, has announced that they will be delivering streaming video via the Net. The $18 a month subscription plan allows the user to view 18 hours of video. (Cheaper plans mean less hours available.) And of course you won’t be able to keep the films you stream. You need to download software to use the service (interestingly The New York Times article about the deal has this to say:

First-time users of the service must download a special piece of software, which, if all goes well, also takes only a few seconds. (When a reporter tried the system at home, however, the process stalled because of a mismatch between the version of Microsoft’s antipiracy software expected by the Netflix viewer and the one loaded in the PC, and it took about 15 minutes to fix the problem with the help of a customer-support specialist. A Netflix spokesman said the problem was known, but occurred only rarely.)

Media, media everywhere is the mantra that many companies are chanting at the moment, (and I’m guessing for the future) so I’m curious. How many GBM readers download movies to view on their computers, streaming or otherwise, and what method do you use?