iPhone and Android users may not have to rely on the observations of sometimes inaccurate weather apps when choosing what to do or what to wear going forward. That’s because Thermodo, a recently released accessory for the iPhone and devices running Google’s Android operating system, allow smartphone owners to determine the exact temperature conditions around them.

Thermodo itself is deceptively small. Users plug in the device to their iPhone or Android device’s headset port. When the device isn’t in use there’s a key ring to make carrying the Thermodo a bit easier. 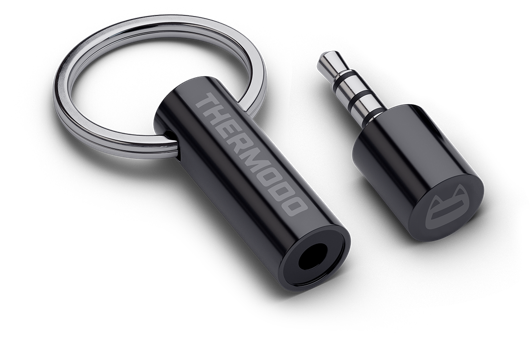 Thermodo’s hope is that smartphone users will buy a the device to assist them in everyday tasks like determining if it’s too cold to leave out pets or too warm for children to play in direct sunlight. Thermodo does seem to have big plans for the $29.99 base sensor. It’s trying to directly appeal to app developers on both platforms already. Users who download the Thermodo companion app can not only check the weather but also modify the sensors behavior. This will allow users to make adjustments specific to the environment they’re using the sensor in.

All told, it’s a pretty interesting example of why users continue to upgrade to smartphones in droves. Thermodo allows iPhone buyers to effortlessly add more functionality to a device that’s already in their pocket and that they know how to use. A device that did like this on its own wouldn’t garner nearly as much attention. It’s a testament to how smartphones are this generation’s pocket knife. An iPhone with an added accessory can literally become anything a user wants it to for a particular task.

Add-ons like these are key for the iPhone since many Android devices include a bevy of sensors the iPhone doesn’t. For example, the Galaxy S4 can detect humidity and temperature without any external accessories.

Users can order a Thermodo now for $29.99. Colors include black, red and white. There’s also a version for $44.99. Though both are functionally identical, the more expensive model is made of metal. Thermodo says it should match the external casing of Apple’s Macbook Air. Both Thermodo devices include the aforementioned key ring at no charge.