Just a few hours after Amazon announced it “sold out” of the Kindle Fire we have a leaked image of the new Kindle Fire.

The photo comes from The Verge and looks like a new 7-inch Amazon tablet. The Verge‘s source says Amazon is working on 7-inch and 10-inch models of the Kindle Fire 2. There’s a possibility that this is the 10-inch model, but the size of the keyboard on the screen seems to indicate that it’s a smaller screen device. 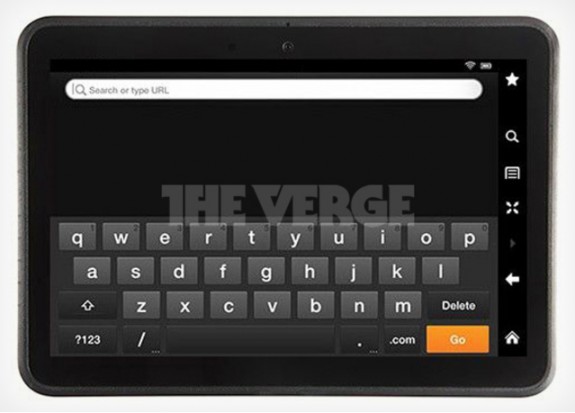 The image on the screen looks like a web browser with no page loaded. That explains the crowded menu bar on the right side of the device.

Unlike the first Kindle Fire which heavily resembled the BlackBerry PlayBook, this model looks like it takes a few cues from Apple’s iPad. Apple is the only other company that makes 4:3 tablets, most Android tablets are widescreen with a 16:9 or 16:10 aspect ratio.

The Verge also saw an image of a new user interface that was cleaner than the UI in the current Kindle Fire, but the source asked them not to publish it.

We should hear more about the possible new UI and design of the Kindle Fire 2 at Amazon’s September 6 event.