Apple held a big press event at their headquarters in California, today, where they announced updates to their iPhones, iPads, Apple Watch and Apple TV. One of the stars of the show is a new Apple iPad Pro. Here’s what you need to know.

When the iPad Pro first came out last year, opinions were divided: should iPads have a stylus? Should an iPad be this big? Which operating system should it run, iOS or OS X (yes, yes, and iOS, for the love of god). Overall, though, it’s been a solid, if expensive, addition to Apple’s growing tablet line-up.

Since day one, however, when Apple first showed off the iPad Pro’s new features – four orientation-aware speakers, Apple Pencil stylus support, 4GB of RAM, a crazy fast new SoC – fans of the company have been calling for Apple to bring some of these features, exclusive to the iPad Pro, down to some of the smaller iPads. Showing that the company does actually listen to its customers’ demands, Apple did just that.

You’re thinking, wasn’t the iPad Pro introduced last year? It was. It was also re-introduced in California today. Taking a page from their MacBooks Air and Pro, Apple now has two iPad Pros, identical in most respects – but two entirely different form factors. Last year’s iPad Pro, still the standard bearer for the Pro tablet lineup, uses a 12.9-inch display. Today’s iPad Pro, on the other hand, uses the same 9.7-inch screen size that has defined the iPad since its introduction. It also matches the physical dimensions of the iPad Air: same size, and same weight. 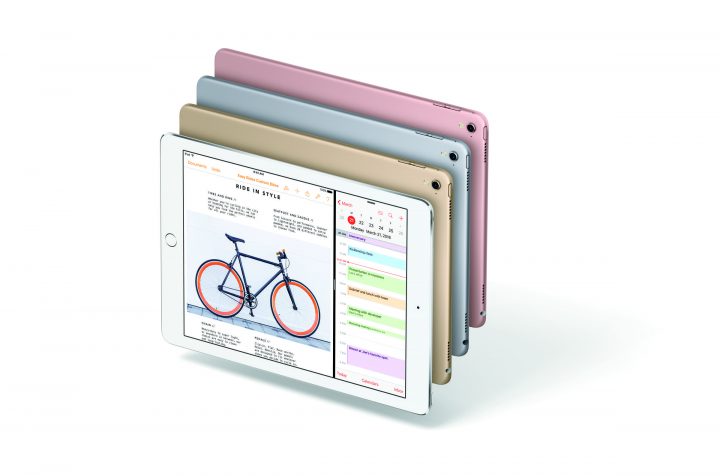 It does get a little face lift, however – while the other iPad Pro comes in Silver, Space Grey, and Gold, the new iPad Pro gets those colors plus Apple’s new Rose Gold aluminum.

When it comes to internals, the new 9.7-inch iPad Pro is almost the same as its bigger, 12.9-inch sibling. Inside, you’ll find an Apple A9X processor, the brains of the whole operation. Apple’s smaller iPad Pro has had it dialed back a little bit, however, likely to save on battery life and prevent overheating. The largest iPad has its A9X running around 4% faster, while the GPU looks to be running around 16% faster. That second discrepancy is probably thanks to the difference in screen resolution.

While the iPads Pro may be different sizes, Apple was sure to keep them at the same pixel density (how many pixels can fit in an inch, diagonally). That means that the 9.7-inch iPad Pro has a resolution of 2048 x 1536, like every other iPad with a Retina display. The 12.9-inch iPad Pro, meanwhile, has a resolution of 2732 x 2048 – but both screens have a pixel density of 264 ppi, meaning that text on each display should look pretty much identical. The 9.7-inch iPad Pro has a more advanced screen than the 12.9-inch iPad Pro, too: it supports a new, wider color gamut (that means it can produce more colors) and a new screen technology called True Tone display. 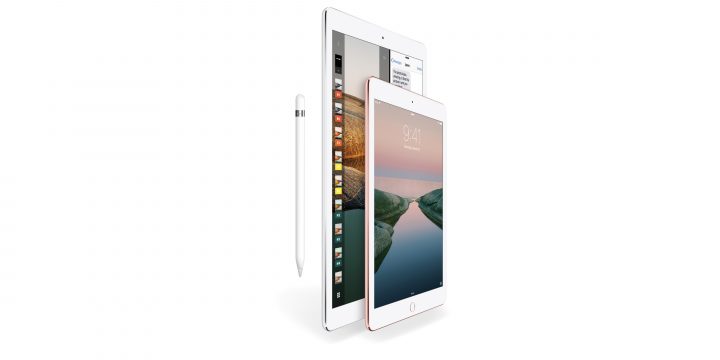 A 9.7-inch Apple iPad Pro sits in front of the 12.9-inch iPad Pro. The Apple Pencil stylus, shown here to the left, works with both tablets. Credit: Apple

True Tone was first introduced with the iPhone 5S: on the iPhone, it’s a set of two differently colored LEDs; when your iPhone takes a picture with flash, it’ll first analyze the scene to determine what kind of color blend to light it with, then light the LEDs appropriately. The True Tone display similarly analyzes the room where you’re using the iPad and changes the white balance of the display to match whatever light source you’re using. That means that whites will always look pretty white, no matter whether you’re out in the sun, or in a cubicle under fluorescent strips.

Both iPads have 4GB of memory, and come in either 32GB, 128GB, or 256GB of storage space. The 256GB tier was newly added today, and made retroactive to the larger iPad Pro. The newer iPad Pro has a better camera, however, which makes sense – you’re more likely to use the camera on a smaller tablet, so it naturally becomes more important that it’s good. In this case, it picks up the great new camera from the iPhone 6s, meaning it offers 12MP images with an f/2.2 aperture (the other iPad Pro has an 8MP shooter with an f/2.4 aperture). The new camera also has better, faster focus, and is capable of shooting 4K video, as well as 1080p and 720p slo-mo at 120fps and 240fps, respectively. It also has a flash, which is a first on the iPad lineup. The front camera has been upgraded to a 5MP shooter, which is a noticeable improvement over the other iPads’ 1.2MP camera.

A major improvement, found in both iPads Pro, is Apple’s intelligent new quad-speaker setup. There are two speakers each on both ends of the tablets; no matter whether you hold it in portrait or landscape orientation, the iPad can intelligently change the speakers’ output to make sure it always sounds the same. 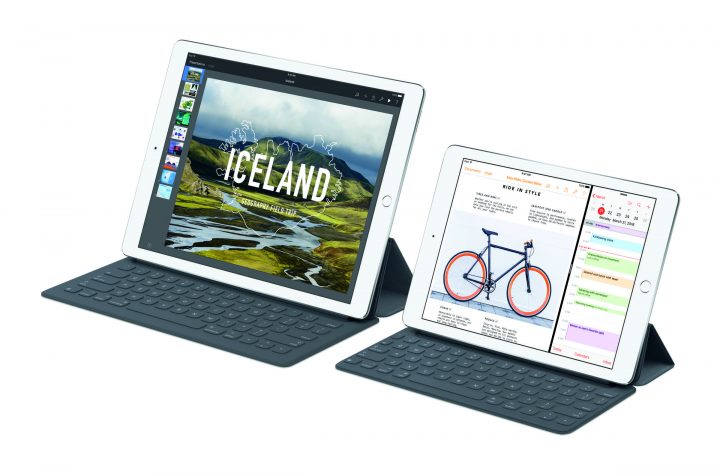 If you happen to pick up an LTE model, there are a couple of changes here, as well. The newest iPad Pro supports 23 LTE bands, compared to the 12.9-inch iPad Pro’s 20. That means that it should have better compatibility with more carriers around the world, and it could potentially offer faster data access. The new iPad also includes support for Apple’s embedded SIM technology; while it’s still early days yet for the e-SIM, a future iOS update could allow you to switch data carriers simply by visiting a webpage. Apple includes a disclaimer for the smaller iPad Pro, noting that the e-SIM could be disabled if you purchase it directly from a carrier; it’s also not available in China in any fashion.

Unless it’s starting an all-new product category for itself, Apple has a longstanding tradition of announcing products and then making them available for purchase soon after. Today is no exception. You’ll be able to pre-order the 9.7-inch iPad Pro starting on March 24th, which is this Thursday. They’ll be shipping on March 31st, and they’ll also be available in Apple Retail stores from that date forward. 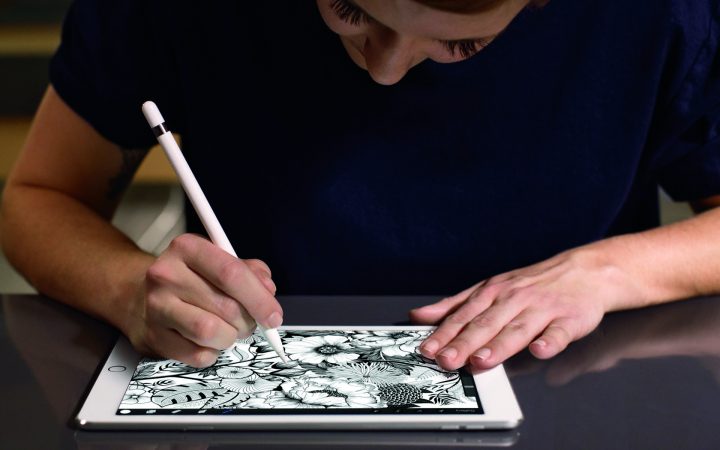 An artist draws on the 9.7-inch Apple iPad Pro with the Pencil stylus. Credit: Apple