There’s just hours to go until Apple ushers in a new age of mobile payments with its iPhone 6 and iPhone 6 Plus smartphones. Those two device allow users to pay for everyday items at thousands of locations with Apple Pay, a new payment system that’s built into iOS. The first charges with Apple Pay haven’t even been made yet, but already it’s becoming clear that Apple Pay is poised to crush anything else in the space. Early this morning Bank Of America announced that it’d introduce support for Apple Pay in October.

Bank Of America made the announcement in emails to its customers early this morning, according to a screenshot sent to GottaBeMobile by a Bank Of America customer. In the email, Bank Of America shows a picture of an iPhone running iOS 8 with a Bank of America credit card on the screen. The text in the email is pretty short. In the email Bank Of America confirms that although Apple Pay won’t be available immediately, users can expect it to launch in October. When it does, users will be able to pay for their purchase with a debit or credit card through some iPhone apps and “over 200,000 stores” nationwide. 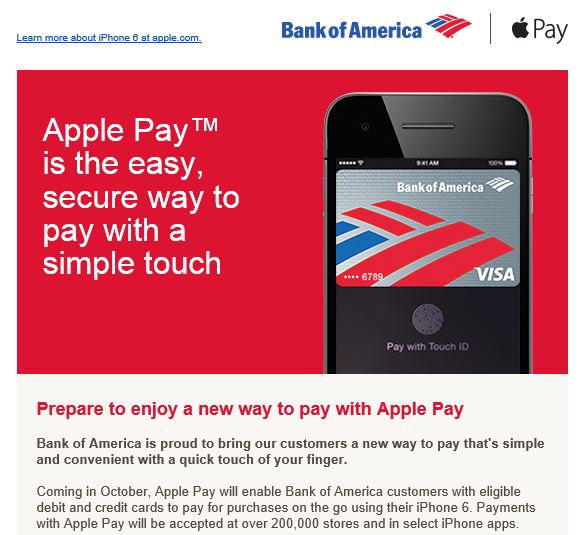 With the launch of Bank Of America’s Apply Pay support set, it’s now clear just how close Apple is to dominating mobile payments before it’s shipped its first Apple Pay compatible device. In addition to Bank of America, Apple’s iPhone 6 Apple Pay information page is showing coming support from American Express, Capital One, Chase, Citi and Wells Fargo. Banks coming soon include Navy Federal Credit Union, Barclay Card, PNC, USAA and US Bank. That’s a lot of banks on-board for a system that isn’t even out the door yet and certainly better support than what rival digital payment systems are getting.

Apple revealed Apply Pay on-stage with the iPhone 6 and iPhone 6 Plus. Both of these devices will allow users to tap the top of their iPhone on a wireless pad, then verify their payment option with their fingerprint. Apple Pay isn’t meant to supplement having a physical credit or debit card. It’s meant to entirely replace the debit or credit card.

If this scenario sounds familiar it is because other companies have been trying to do the same in the mobile payments space for years. Google was among the very first to enter the market. Its effort, dubbed Google Wallet, allowed Android users to pay for items with their smartphone too. Gift cards were also included in Google Wallet. Unfortunately, Google Wallet ran into the same problems most futuristic things do: wireless carriers.

Most carriers in the United States blocked Google Wallet for being installed on devices they sell. Instead, AT&T, T-Mobile and Verizon banded together to create SoftCard, a payment system that they control. Adoption of SoftCard has been minimal at best – mainly because it’s only available on Android and isn’t as well-integrated into the Android experience. There’s an app involved in the setup process and users actually have to order a secure SIM card before they can take advantage of the service.

The Apple Watch will allow older iPhones to use the Apple Pay system too. Unfortunately, Apple Watch isn’t expected to launch until early in 2015.