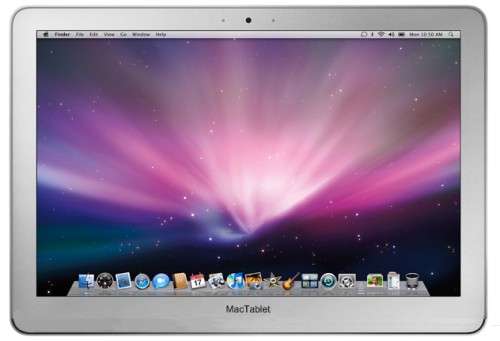 Citing a reliable source, Gizmodo is reporting that Apple may be working on tablets that are bigger than previously rumored, 13″ and 15″.

This source claims that the two touchscreen prototypesÃ¢â‚¬”made of aluminum, but on the shape of big iPhonesÃ¢â‚¬”were in a factory in Shenzuen, China. One of them “was running Mac OS X 10.5.” When I asked, the source didn’t know if these were built for demonstration purposes, or if they were preproduction units. The company has a tight relation with Apple but “it’s not FoxConn.”

Sounds quite likely to me, but only because the supposed tablets are prototypes. Apple works on a lot of projects and not all go beyond the prototype stage. Since it’s almost certain they are working on a tablet, it’s logical that they’d experiment with the screen size, particularly in their standard Macbook sizes. As to whether this amounts to anything in the near future, that seems doubtful.

For the record, I would love to see any tablet in this size range. The current standard of 12″ 16:9 aspect on Tablet PCs is too restrictive for me. I want a little more variety to choose from.