According to a tweet posted by former Apple TV UI designer Michael Margolis, the newly revamped Apple TV UI released on the 2012 box that was introduced alongside Apple’s new third-generation iPad is actually a design that was rejected by late Apple CEO Steve Jobs. Replying to a user on Twitter, Margolis expresses some concern that there is now no person in Apple’s ranks to effectively can bad design. “Fun fact,” Margolis says, “Those new designed were tossed out 5 years ago because [Steve Jobs] didn’t like them. Now there is nobody to say ‘no’ to bad design.” 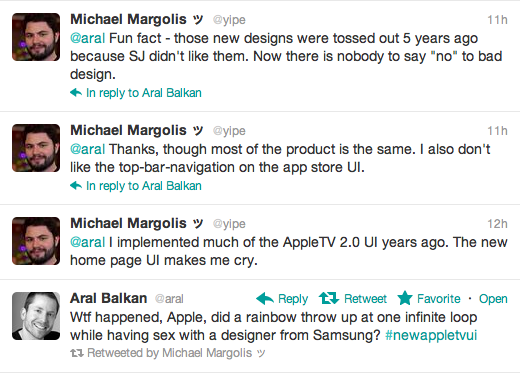 Margolis indicated that he was a ‘Professional Hobbyist,’–Apple calls Apple TV a ‘hobby’ as sales never took off quite as much as the company had anticipated for–for Apple TV at Apple, Inc.

Though the set-top box that taps into Apple’s iTunes ecosystem for renting, buying, and streaming movies, TV shows, and music received mixed reviews, most of the reviews were positive. An updated single-core A5 processor helps the box stream 1080p videos, which are almost Blu-Ray quality, and an updated UI navigation brings a lot of third-party contents and ‘channels’ to the front for easy navigation. Still missing from Apple TV are support for third-party apps, other services like Hulu Plus and Amazon Video on Demand, as well as easy access to the popular Internet websites to stream free content.

Apple is also rumored to be working on a standalone TV set with a new navigation system, which has been nicknamed iTV. 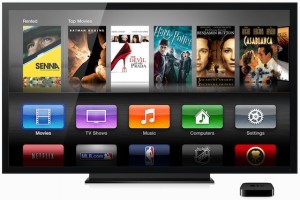 Since having issued the original tweet, Margolis has softened his blow on Apple. Writing to The Next Web, the former Apple TV designers says:

The new UI shouldn’t come as a surprise to anyone. There is a clear effort at Apple to make everything match the look and feel of their popular iOS products – starting with Lion and increasing momentum with Mountain Lion.

To be clear – he didn’t like the original grid. This was before the iPhone was popular and before the iPad even existed.

Given that the iPad is far more successful than the AppleTV, migrating the AppleTV to look more like the iPad was probably a very smart move – even if some of the users of the old UI don’t prefer the new one.

And furthermore, this is what Margolis told TechCrunch regarding working for Jobs:

Steve rejecting a design five years ago isn’t a huge deal. Steve was well known for rejecting ideas, tweaking them, and turning them into something even better. And that’s a very good thing. One of my favorite parts of working at Apple was knowing that SJ said “no” to most everything initially, even if he later came to like it, advocate for it, and eventually proudly present it on stage. This helped the company stay focused and drove people to constantly improve, iterate, and turn the proverbial knob to 11 on everything.

So did Steve Jobs can a perfectly good idea because he is a control freak? Or did a post-Jobs Apple ruin the minimalism that Jobs had envisioned for Apple?

Via: 9to5 Mac and MacRumors