Interesting. Apple is known for doing some interesting shuffling with its delivery carriers when it comes to a new product. We’ve seen all sorts of shenanigans in the past with packages sitting in warehouses just waiting for the official delivery date. That appears to be the case for the new iPad. But for those who might have ordered an Apple TV on the day it was announced, you might be in for an early surprise.

Last night I got a notice that my Apple TV had shipped and would arrive today. Given past history I figured that was going to get corrected and it wouldn’t show up until tomorrow, Friday March 15. But, lo and behold, it showed up just a few minutes ago via Fedex.

Too bad I’ve got a long day with a rehearsal that won’t end until late tonight to test this out. The big difference with the new update is that it will handle HD (1080p) if your TV set is capable of it for both iTunes and Netflix content. 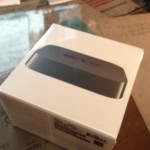 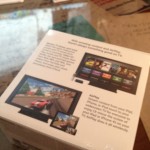