As AT&T Mobility and T-Mobile U.S. begin to compete fore more customers, American wireless customers are winning with increased savings on their cell phone bills. AT&T Mobility, the nation’s second largest wireless network, announced over the weekend that it was slashing prices to individual plans, saving customers as much as $15 each month.

Now, individual plan customers can pay just $65 per month, without a contract as long as they don’t accept any subsidies for a new phone purchase and instead opt to pay for the full retail price of the phone or go with an AT&T Next monthly installment pricing, to get unlimited calls and texts as well as 2 GB of monthly data.

For existing customers to receive this $15 monthly savings, they will manually have to log into their account online and make the switch or call AT&T’s customer service. This pricing will also apply to existing customers who are currently under contract.

For new customers, you either have to bring your own device (that’s compatible with the network), pay for a device at the full retail price, or participate in AT&T’s Next program that allows you to make monthly installment payments in purchasing the device at full retail price. For new customers who want to get a subsidy (pay for a discounted phone cost) and be locked in under a two-year contract, the monthly data and voice pricing will be more expensive.

Depending on how much data you consume, AT&T is also offering other plans with varying amounts of data. You choose how much data you need–up to 6 GB. Then for a smartphone that’s not on contract, you can add $25 on top of the plan. 2 GB of data costs $40, and one phone line for $25 would give you your total $65 per month charge.

For a phone that you buy with subsidy and opt for a contract, you will be paying a little bit more. Each month, you can expect to pay $40 for the phone line in addition to your data allotment, which would mean $80 total for the 2 GB plan with unlimited text and talk. 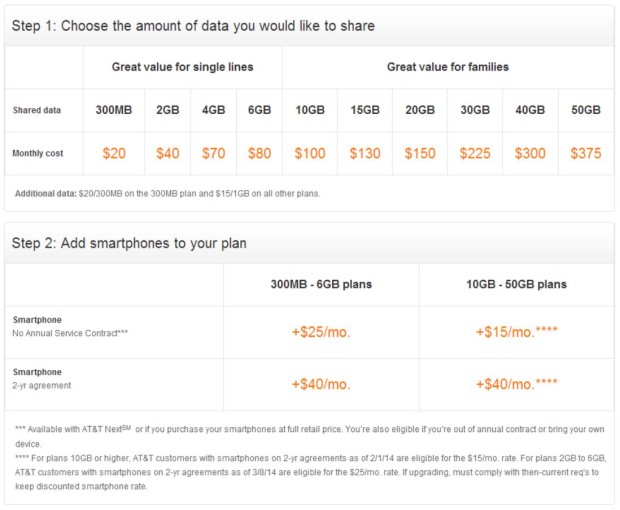 For customers with two lines, you can add the same $25 or $40 for the second line as well depending on if you want a no-contract or a contract plan. These plans also include international texting from the U.S. to 190 countries in the world. Customers with three lines should really consider AT&T’s new Mobile Share plans that give you unlimited calling and texting and 10 GB of data for just $145 per month for three lines.

To see how competitive AT&T is against rival T-Mobile, the plans are still a bit more expensive though AT&T does have a larger 4G LTE footprint.

In comparison, T-Mobile offers 2.5 GB of data per month along with unlimited calling and texting for just $60 a month. With the T-Mobile plan, you’re paying $5 less per month, or $60 less per year, and gain an extra 0.5 GB of data per month over the AT&T plan. Additionally, T-Mobile will allow you to roam internationally with free data in over 120 countries, something that AT&T doesn’t yet offer.

In my experience with T-Mobile in San Jose, California, an area with strong LTE coverage, when I reviewed the Sony Xperia Z1s, I found that if you’re in T-Mobile’s LTE footprint, you’ll benefit from very competitive LTE speeds that are on par with AT&T’s and Verizon’s best-in-class networks. Once you hop over to 4G HSPA+, AT&T does a far better job with reducing latency and keeping speeds fast whereas it seems that the phone’s data connection often struggled under T-Mobile.

Regardless, it seems that T-Mobile’s UN-carrier initiatives are shaking up the wireless industry. Once not even considered a competitor to heavyweights AT&T and Verizon, T-Mobile’s plans are now forcing AT&T to be more competitive with pricing, a win for consumers. Still, it seems that more needs to be done in terms of pricing. According to recent research published by the Wall Street Journal, American customers are paying more for their wireless bills and the high prices will continue to climb as consumers will utilize more data due to faster speeds and more capable smartphones.