Since its inception BlackBerry 10, the operating system that BlackBerry hoped would return it to relevance in the age of the iPhone and Google’s Android, has had to contend with Windows Phone, Microsoft’s mobile operating system. However, that could all be changing. Microsoft’s success so far has been based on two-factors. One is that its hybrid partner model allows hardware makers to create their own devices with Microsoft software. The second has been that Windows Phone users enjoy a much larger selection of quality applications than they’d get if they purchased a BlackBerry device.

It’s that second advantage that BlackBerry is aiming to take away from Windows Phone with its release of BlackBerry 10.2.1 today.

Following the update owners of BlackBerry 10.2.1 devices are finally able to install applications made for Google’s Android operating system seamlessly – or at least more seamlessly than they could with the prior version of the operating system. So far, early reports indicate that following the update users of the BlackBerry Q5, BlackBerry Q10 and BlackBerry Z10 can install Android and run apps without those apps having to go through the somewhat cumbersome conversion process they once did. 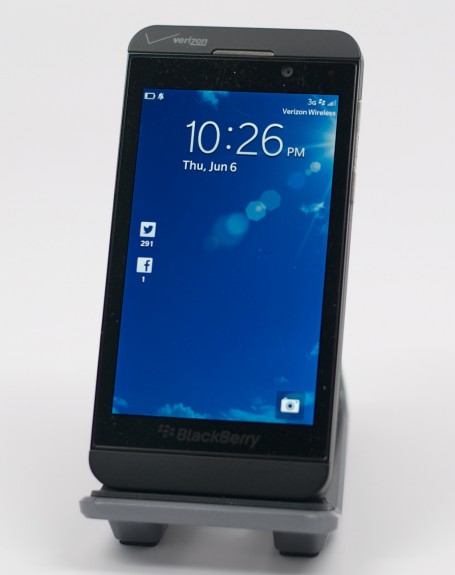 In fact, the process is so seamless The Verge reports that it’s only had issues installing Google-made applications. While the report doesn’t give any reason for why that it is, it’s likely the issue with Google made apps stems from BlackBerry 10 not supporting the native Google Play functions that are ubiquitous on devices built to run Android natively.

Simply put, it’s a huge advantage for BlackBerry. The company’s smartphone fortunes with consumers might not ever recover but as long as it’s stuck battling Microsoft’s Windows Phone for the third-largest ecosystem spot it needs all the help it can possibly get. For comparison, the Google Play Store boasts 1 million applications, many of which BlackBerry owners will be able to install and use. Windows Phone recently passed 200,000 apps.

BlackBerry didn’t stop there either. The BlackBerry 10.2.1 update also includes automatic software updates, a battery monitor, a offline reading mode that will allow users to read articles without an internet connection, a refined phone interface and support for FM radios. Unfortunately for BlackBerry Z10 users, only the BlackBerry Z30, BlackBerry Q10 and Blackberry Q5 have FM radios already built-in.

Blackberry says that users in the United States, Canada, the Middle East, Africa, Asia Pacific and Latin America with BlackBerry 10 devices should begin getting the update once their carrier approves it.