Some say that Microsoft may have just ruined its chances at being the best cloud storage service available anywhere. This morning the company unveiled changes to its Microsoft OneDrive service that raise prices, cuts free offerings and break promises the company made to users.

Microsoft quietly announced changes to OneDrive this morning in a post on the OneDrive Blog. OneDrive lets users hand off their pictures, music and documents to Microsoft’s servers. While stored on a server thousands of miles away, Microsoft makes the data available to users through OneDrive apps for just about everything that has an app store and a few platforms that don’t. OneDrive has both monthly and yearly plans. Last year, Microsoft promised users unlimited storage when they signed up for Office 365, another of its subscription services. 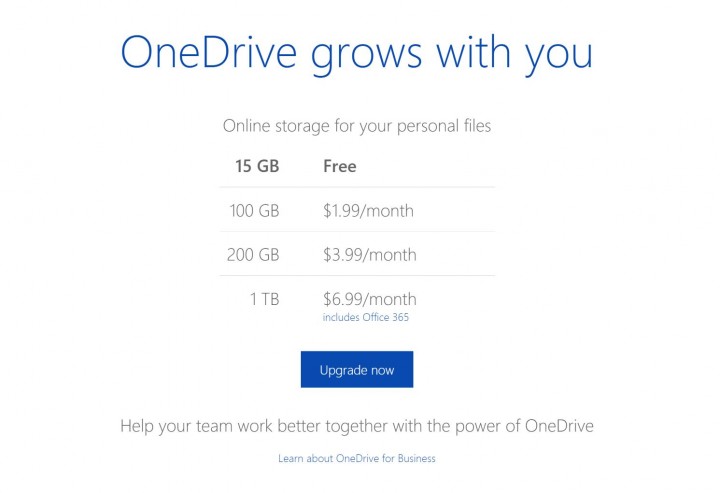 Read: What is OneDrive?

Microsoft is also rolling out some pretty harsh changes to its entire line-up of plans. OneDrive offers 100GB for $1.99 a month and 200GB for $2.99 a month. In January the company plans to replace those plans with a single $1.99 option for 50GB of storage.

The other moves that Microsoft announced this morning certainly aren’t helping it with die-hard fans of the service. In addition to raising prices, Microsoft is slashing the amount of free storage it gives to users with a Microsoft Account. Previously, Microsoft gave everyone 15GB of free storage to use with their Windows PCs, smartphones, Android devices and more. Additionally, the company provided more bonuses to users for referring their friends and adding camera back up to their smartphone.

Going forward, users will only get 5GB of OneDrive storage free. What’s more, Microsoft is eliminating the storage bonus that users get for adding automatic camera backups to OneDrive from their iOS and Android devices.

Anyone on OneDrive using more than 1TB of storage will have “at least” a year to remove their files from OneDrive. Microsoft is offering subscription refunds to anyone and everyone that purchased an Office 365 subscription thinking they would have unlimited storage and not 1TB. Free OneDrive users who are over the new 5GB limit are entitled to a free year of Office 365 Personal, which comes with 1TB of storage. Microsoft says it won’t force any users of its 100GB and 200GB plans to change their usage habits.

Microsoft OneDrive users can read more about the storage changes in a new FAQ area setup to manage the storage plan transitions.

Gotta Be Mobile took a look at OneDrive storage earlier this year. At the time, the service was the most complete, well-rounded cloud storage utility for Windows besides Drop Box. Recent changes now call that into question. Windows 10, Microsoft’s operating system for notebooks, desktops and tablets, no longer lets users sync OneDrive folders to external storage like MicroSD cards. The company also ditched the placeholder files that allowed users to organize content stored on OneDrive without having to sync every single file to their local drive.

Anyone using OneDrive should head to the service’s website now to review how much storage they’re using. Based on the amount of storage their consumer and their needs, it might be worth investigating other services like Google Drive or Apple’s iCloud.