There is a new Destiny Loot cave delivering an easy way for players to kill off enemies from a distance and pick up loot to upgrade their Destiny character. If you are looking for a legendary Engram farming location

According to Bungie these changes are essential to keep the in game economy in check. The developers clearly see Destiny Loot Caves as “economy exploits” that they will shut down so if you want to grind out some loot you better get to farming. 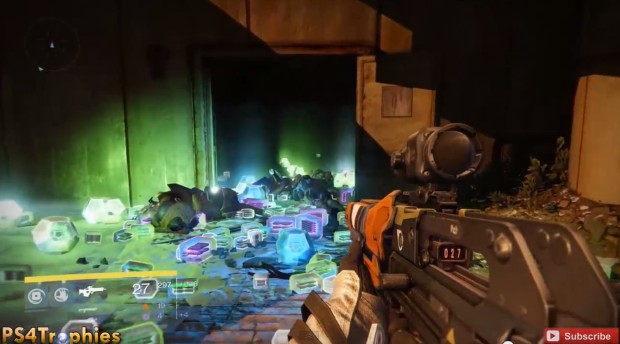 Here’s what awaits at the new Destiny Loot Cave, 2.0, which is a perfect place for Legendary Engram farming. Image (PS4 Trophies)

To advance in Destiny you need to kill enemies and pick up loot that you can use to buy and barter for upgraded items. You need to build a better character to take on the more advanced enemies and to win multiplayer battles in the Crucible.

Some gamers are upset by the slow delivery of Destiny loot, even when taking on bigger and more powerful enemies. Instead of wandering the globe and looking for small groups to kill gamers discovered a cave where the enemies respawn quickly and were easy to kill off for fast loot farming.

The Destiny Loot farm is back in the Rocketyards. You’ll need to take out the enemies and then stand in the distance to pick off enemies as they exit. This is a six second spawn and if enemies run past your shots, they will likely run towards you so you’ll have a second chance.

According to PS4 Trophies this location for Engram Farming offers the same drop rate of blue and legendary engrams. You do need to hit level 20 before you start doing this.

After you run out of ammo head to the cave or room and collect all of your loot and all the ammo. You can do this for 30 to 60 minutes and build up a huge pile of loot. This looks to be the easiest Destiny Engram farming option yet.

If you can’t find your way to the rocket yard, there is a walkthrough from whiteboy7thst in the video below to help you find the best Legendary Engram farming location in Destiny.

This is a super simple way to get character upgrades, but you will need to put in some time. If you spend almost an hour at this Engram farming location you’ll find a pile of Engrams so high you might not believe it’s real.

This is exactly why Bungie is very likely to shut this down very quickly. Odds are good you can spend the next several days doing this, and if you aren’t a level 20 yet you can spend your weekend leveling up so that you can try to take advantage of the easy Legendary Engram farming opportunity while it lasts.